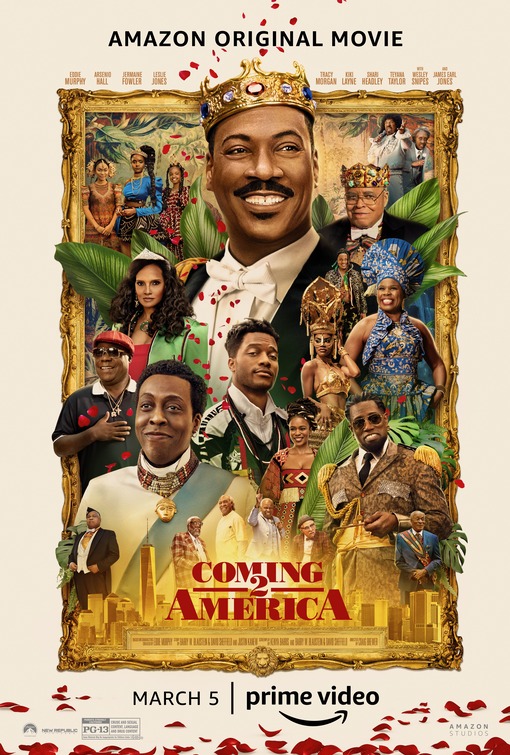 Thirty-three years ago the world was a different place. The time was 1988 and Eddie Murphy was on top of the world and Arsenio Hall was about to become one of the biggest talk show hosts on TV. This was also the year when Coming to America hit the big screen and introduced us to the many characters of both Murphy and Hall. Now Prince, I mean King Akeem is back and this time he needs to find a son he never knew he had to be the heir of his kingdom.

Life in Zamunda has been pretty good for Prince Akeem (Eddie Murphy) and Lisa (Shari Headley), except they have not been able to produce a son. While they have three daughters who are all capable to rule one day, Zumunda only allows a man to rule. With King Jaffe Joffer (James Earl Jones ) on his death bed, neighboring General Izzi (Wesley Snipes) sees a chance to push Akeem out of power once his father is gone. All is not lost though as Semmi (Arsenio Hall) informs Akeem of a night that things happened and the result was a son born, a son who could be the future heir to Zumunda. Off to America Akeem and Semmi go to find his long lost son, and if it is anything like the original, you can bet all kinds of crazy character antics will ensue. This is where you will be disappointed, as the screenplay written by David Sheffield, Kenya Barris, and Berry W. Blaustein do a little “Freaky Friday” action and switch things up. Like before this is a fish out of water story, but this time it’s the ones from Queens who don’t fit it. Akeem brings back his son Lavelle (Jermaine Fowler) and his mother Mary (Leslie Jones) back home. Where everyone is prim and proper in the royal palace, Mary and Lavelle buck the system and bring a taste of Queens with them. There is not enough flavor though to bring out much more than some chuckles as the jokes have lost their edge and to be honest, telling the same type of jokes from a three decade old film doesn’t always work.

What does work is seeing the entire cast back, except for a few. This allows for some more McDowell jokes (where McDonalds has the golden arches, they have the golden arcs) and another helping of Sexual Chocolate. That familiarity with the characters and the joy of seeing them again is really what saves the movie.  The edginess of the original is gone and it is replaced with a more family kind of comedy. Like with Akeem in the first one, his son finds a way to fit in and still be himself and also like his father he gets to marry for love and not who is picked for him. I really was fine with how this movie turned out, but I think it is more because of nostalgia than anything else. The cast is still great and Murphy, even family friendly Murphy still has it in him. I wouldn’t have cared if I ever got to see Zumunda again, because the original had me satisfied. With that said I enjoyed Coming 2 America, I just wished they leaned on some of the out dated concepts a bit more. Plus with all that we’ve learned over the years I would have liked to seen the filmmakers attempt to bring a bit more to the America we live in now.

Raya and the Last Dragon