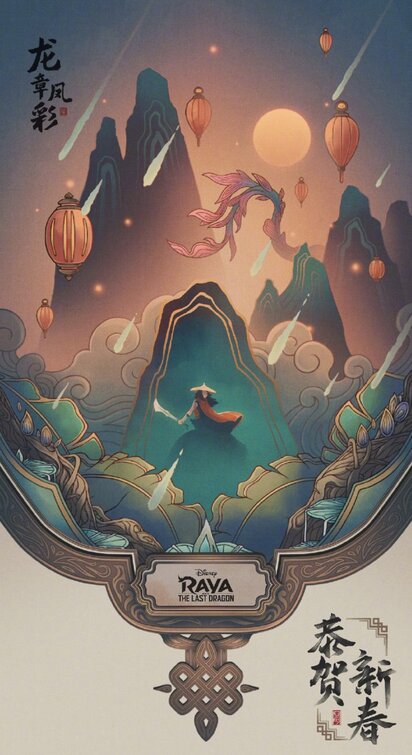 For its 59th film release, Walt Disney Studios has gone back to a formula that has worked so well for them over the past few years. The one where the strong heroine is leading the way and doesn’t need a prince charming to come to the rescue. We have seen this already work so well with Frozen and Moana  and you are about to see that the best is yet to come in the new instant Disney classic that is Raya and the Last Dragon.

In the land of Kumandra, life has never been the same since the dragons disappeared. Five hundred years ago the Druuns almost turned everyone to stone, but they were saved in the end by the last dragon who vanquished them and thus saving the world. When the dust cleared the last dragon named Sisu (Awkwafina) was gone and all that was left was a stone with dragon power. Kumandra broken up in five distinct lands – Fang, Spine, Talon, Tail, and Heart- none of these lands trust each other, but Heart’s chief Benja (Daniel Day Kim) wants to change that. He believes he has to take the first step to try and bring Kumandra back together. Things do not go as planned and when an act of betrayal causes the stone to break, it unleashes the Druuns back into the world. Raya (Kelly Marie Tran), who is the princess of Heart barley escapes and sets out to find the last dragon and what she believes is the only way to save her home. Raya, who is part warrior and 100% bad ass takes her trusty pet Tuk Tuk (Allan Tudyk) on an adventure that even Indiana Jones would be proud of. What follows are action sequences like I have never seen in an animated film and the sheer beauty throughout is something everyone involved should be proud of. There is not just great action though, as this is a Disney film, that means humor and hijinks, and of course characters that your kids will want t-shirts and toys of. While you might stay for the cuteness, you came for the adventure and Raya is going to take you on a pretty fantastic one. There are scenes that would look right at home in a game like Tomb Raider, or a martial arts epic, but that is just a small part in this complex film.

When Raya is not getting around some booby-trap she is mixing it up with some martial arts that are incredible to watch, both in choreography and how the characters and their weapons interact. Directors Don Hall and Carlos López Estrada get the absolute most out of this film and deliver one of the best Disney animated films that doesn’t have the Pixar name attached to it. Let’s face it though these films are always about their lead character and their funny sidekick and that’s where Raya and the Last Dragon comes up aces as Sisu voiced by Awkwafina brings back warm feelings of The Genie, voiced by the great Robin Williams. I had a phenominal time with this movie and in the merry band of Disney Princess, Raya has shot her way up to the top.  In a world where we seem divided this movie reminds us that no matter how different we think we are, deep down we really are the same. And hey, swords and a dragon, what more do you want?