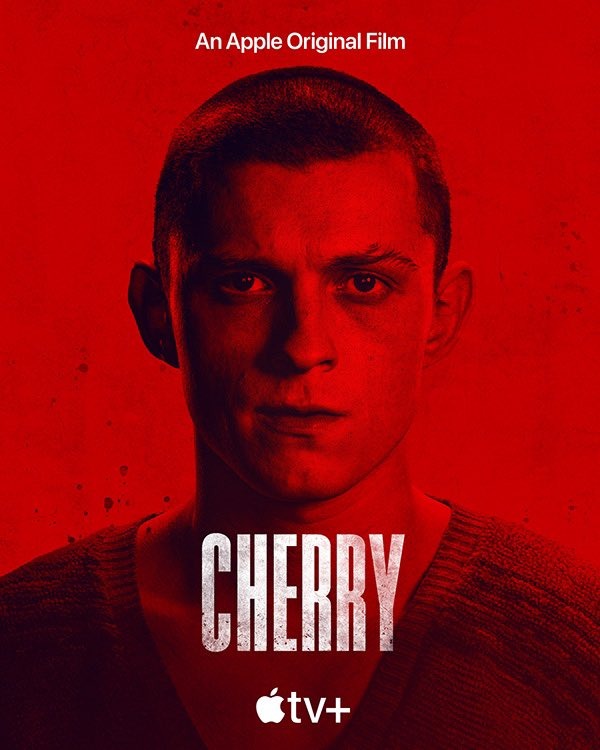 For the last seven years Anthony and Joe Russo have been making our super hero dreams come true. They did after all deliver the last two Captain America films, as well as Avengers :Infinity War and Endgame, so you know it was time to try something else. Cherry might be the furthest thing from their previous work, while also giving  the brothers the space to spread their wings.

Cherry (Tom Holland) has just robbed a bank, but we are not about to see that story, we are going to see the story about everything  that leads us to that point. Go back a few years and Cherry is a pretty average kid who is making his way through school. There he meets Emily (Ciara Bravo), who he is smitten with pretty much from the get go. After what seems like a storied love affair, it all comes to an end when Emily tells Cherry she is moving to Canada to finish school. This sets off a chain events that neither will see coming. Told in what feels like a modern Goodfellas kind of way, with his voice over narration and forth wall breaking, Cherry too often seems like it’s in over its head. Based off of Nico Walker’s novel of the same name and written for the screen by Angela Russo-Otstot and Jessica Goldberg, the story unfortunately is not the weakest link, that lies elsewhere.  The Russo’s seem to have gone out of their way to show they don’t need no stinking green screens and have made a very “artsy” movie to prove their worth. They pull out all the stops, like changes in aspect ratio, dolly shots, extreme angles, and jump cuts, all to flex their stylistic muscles. As for the story itself it really takes a turn when Cherry in an act of heartbrokenness decides to join the army. And after seeing the horrors of war, comes back a different man.

Gone is the average guy who just wanted to be with Emily and in his place is someone who has trouble sleeping and just functioning in the world period. Soon he has dived deep into the world of drugs that also traps Emily as well, and when he can’t afford their habit, he finds a new hobby. Cherry soon starts robbing banks, something he surprisingly gets away with for longer than you would think. Still he and Emily are in pretty bad shape, and it takes even more before Cherry reaches the end of his rope.

It seems fitting that Cherry is about someone taking drugs because the film makes you feel like you on them at times. The Russo’s mish-mash of influences wants Cherry to be sad and important, but somehow shoots too far in both those regards.  What we get is the answer to the question, what would Goodfellas been like it was narrated by the kid from American Beauty? Not everything is doom and gloom though and for its missteps Cherry still has things working for it. For one it shows Holland is more range than your friendly neighborhood Spider-Man, as he tries his hardest to push through the films flaws. But again that showcases the problems even more as both Holland and The Russos seem to be trying too hard to escape their previous reputations. Cherry ends up not being that bad, but doesn’t live up to the film that they thought they were making and leads one to believe that this is a subject matter that they may not have been ready for.