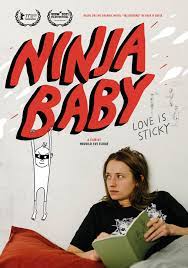 Rakel (Kristine Throp) has a list of five things that she wants to be when she grows up. That list includes things like becoming an astronaut, a comic book writer , or maybe a forest ranger, nowhere though does it say anything about her becoming a mother. So a funny thing happened on the way to making something on that list a reality, an unexpected pregnancy which can alter a lot of plans. Ninjababy, written by Johan Fasting and Yngvid Sve Flikke, the later also directing,  is a story of one woman dealing with something unexpected and truly making the best of it.

Rakel is not much different from most people in her mid-twenties. Her life is filled with lots of drinking, some drugs and of course hooking up with guys. When she starts to gain a little weight among other things, she attributes all of it to something else, because she can’t be pregnant, as she is on the pill.  With urging from her roommate, Ingrid (Tora Dietrichson) Rakel takes a pregnancy test and guess what? She is in fact expecting. With only one solution on her mind, Rakel goes and sees a Doctor, only to find out not only is she pregnant, but she is six months pregnant, so she is having this baby wether she likes it or not. Finding out your pregnant when you had no idea all while making bad life choices the whole time doesn’t sound like the recipe for fun times, but Fasting and Flikke sure make it doesn’t lack any. Much like Juno did some thirteen years ago, they use humor to talk about some of the uncomfortable subjects, all while still delivering a movie with heart. Where Ninjababy sets itself apart is the added element of animation, including the character Ninjababy voiced by Herman Tømmeraas, who gets his name by how he appeared, all stealthy.

The next thing Rakel must figure out is who the father is. It could be Mos (Nader Khademi), who she hooked up with because he smelled like butter or Dick Jesus (Arthur Berning), and I will let you figure out for yourself why him. Rakel though still has no plans on keeping it and starts to look into giving it up for adoption, with her only sister being her prime target for that. Things change though and like Rakel’s decision on where the baby goes, Ninjababy goes from making you laugh to pulling on the heart strings. The writing is strong, the film is held together by Thorp’s performance as she provides an infectious amount of energy.  It is not just her as the entire cast is great and makes this a joy to watch. The only flaw would be in the finale, the film tries too hard to bring the tears and it doesn’t feel completely earned. That though was it for me as I have no doubt that given the chance Ninjababy is destined to become an audience favorite.