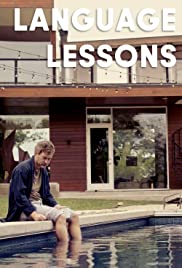 Life for the last year has been difficult for most of us and with the lockdown has come a lot of changes. For you and I it has been not seeing our friends or loved ones that has had the most impact. But in some cases there have been people that have lost their way. The film industry has also had to adapt and films like Lockdown and Host proves that even when things are bleakest, someone sees the opportunity for a story. Natalie Morales and Mark Duplass are two of those people who took what they had to work with and delivered one hell of a finished product.

Adam (Mark Duplass) has just received as a gift from his husband, (the unseen Will) which is the gift of language. That gift is a 100 Spanish lessons with a tutor named Cariño (Natalie Morales) who after talking to Adam agree on a day and time each week to work on these lessons. That first appointment comes with Adam being late and when he and Cariño connect, she learns that he has suffered a personal tragedy. Instead of ending the call, she instead offers to listen, which is the beginning of a beautiful friendship. Duplass, who by now has become an indie-film king and Morales are magical together and have produced a gem of a movie that is clearly a product of current events. Completely taking place on screens, Language Lessons actually is one of those rare films that works on your laptop as well as your TV. As the film continues, Adam and Cariño’s friendship grows, and while Adam becomes like an open book, Cariño is always much more guarded. Duplass, who co-wrote what clearly is a semi improvised script with Morales brings his usual skills to the table, but it is Morales who is a pleasant surprise, based on her previous work. Together they have what feel like natural conversations which lead you to be more invested in the things that happen along the little over an hour and a half ride.

Both Morales and Duplass deserve almost all of the credit for what you see, but as does cinematographer Jeremy Mackie, whose work is barley visible and I mean that as a complement. We all long for basic human connection and Language Lessons shows that you never know where you might find one and how hard we will work to maintain it once we have found it. I had no expectations going in other than enjoying the work of the people involved. What I received in return was a movie that was a joy to watch  and one that proves that the universe always provides what we need when we need it the most.