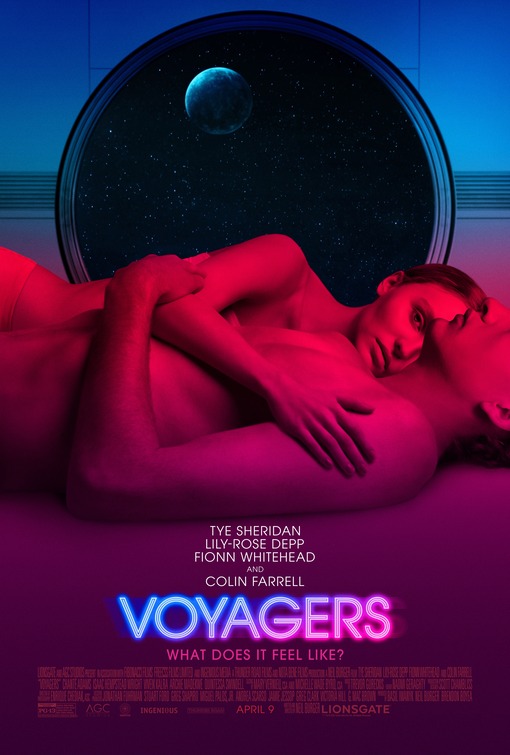 It is not unfeasible to think that we as a species will at some point try to colonize another world. That is the scenario in play in Neil Burger’s new film Voyagers, as it tells the story of a eighty five year quest to inhabit another world. Of course if you are going to send a group of people across space like that you are going to be pretty selective and boy are they. Richard (Colin Farrell ) is part of a team that combines the best of the best and makes a group of kids who they will use to continue the human race. The kids were supposed to go alone, but Richard decides to go along as well, even knowing it’s a one way ticket, I mean what could go wrong?

The kids have been built for the trip and for what lies ahead of them, Richard is just there to make sure everything runs smoothly. Having a bunch of teenagers on a ship could be quite difficult with all the emotions they can go through at that age, but that is taken care of by a drug cocktail that keeps everyone on an even keel. Their world is detected by rules and Burger fills their environment with a sterile whiteness that reflects the life they live. Add the score by Trevor Gureckis and you get the sense while everything seems to be working out, there is something dark lurking on the ship. That darkness starts to come out when Zac (Fionn Whiehead) decides to stop taking the cocktail that keeps him level, because he wants to feel something. Those feelings of course lead to bad things and soon Zac is convincing others to stop taking their meds as well. It is not long after that sides are being taken, as you have the “I want to do whatever I feel like doing”  gang lead by Zac against the group who wants to live by the rules they have always known. That group is lead by Christopher (Tye Sheridan) and Sela (Lily-Rose Depp) who can see that things are heading into the Lord of the Flies territory. Golding’s novel might be the social experiment that always seems to  have the same outcome. In which it usually shows the lack of some sort of structure and does not end well as not everyone who sets the rules can truly rule.

Meanwhile on the ship things have gotten a little crazy and time is running out for a side to win and with it the future of their voyage with it. Burger who both wrote and directed Voyagers sets up things very nicely and throws in some interesting sound design to really set the mood. As the trouble starts to brew in some of the kids there is a noise that often travels through the ship, causing fear in some. However the real danger is not on the outside the ship, but inside and that is where some of the films issues come into play. When the kids start to separate from the good and the bad, the extremes happen rather quickly. Where the first half of the film is filled with suspense, the second half has almost none as you have seen how this story ends already. Add to that that even though the ship’s crew is not large, most of them are just faceless characters that you could give two cents about. You see the plot points ahead of each turn and you know what side each character will pick as most of it is very telegraphed. Voyagers is less like “in space, no one can hear you scream” and more like “in space, no one can hear your teen angst” and maybe it’s better if you don’t.