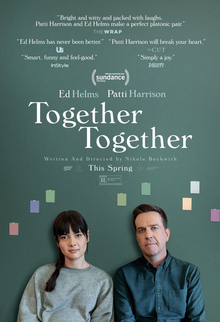 In a world filled with what seems like so many bad things, we all find ourselves searching for what makes us feel good. While for most of us that might be a hug from someone you care about or receiving some unexpected praise for something you did. I bet a romantic comedy about a platonic love between two people wouldn’t make most of your lists, at least that is what you would think. Nikole Beckwith is going to challenge that though, with her really charming film Together Together, a story about two people coming together when one wants to have the baby, but this is not going to go how you’d expect it to.

Matt (Ed Helms) is a single guy who is ready to have a kid, but not having a partner can make that kind of difficult. So Matt decides to find a surrogate and after an interview process decides that Anna (Patti Harrison) is the right woman to carry his baby. Matt, who developed an app that allows people to just look at other people’s picture without having to make a commitment, has everything planned out in his quest to be a dad. Anna’s life is not going as well, as she works at a coffee shop, which includes the co-worker who rarely works, but is always there to give advice, but Anna does have a plan. The idea is to take the money that she is making from being a surrogate and to continue her schooling, after something got her sidetracked at some point. With all the details worked out, the nine month journey for Matt to become a father begins and a very interesting relationship starts. Harrison and Helms is what makes this movie go, as they are both funny and awkward enough to make it all the humorous moments work. You add to that the fantastic supporting roles with people like Tig Notaro, Sufe Bradhsaw, and Julio Torres, who just seem to be playing parts written specifically for them, and you have a cast that just clicks. Even though the script does a decent job of trying to be an innovative take on the traditional romantic comedy, it does stumble a little along the way. Its problems mainly lie in some plot contrivances for the first half of the movie as well as some not so natural exposition at times. Those questionable plot points take place mostly during the first few months of the pregnancy, as Matt and Anna seem to be spending more time than they need to, not for the story, but just to put the two stars together. While the first half has its flaws, the second half of the film is where things get a lot better as that is where the heart and humor come together that adds a warmth to the story.

Knowing the rom-com playbook, you think you know where things are headed, but that is another way Together Together takes a different path, giving you a very satisfying ending while avoiding the same old same old. Being different is often a way to stand out, and in the romantic comedy game that can be big. Beckwith delivers a story that achieves that, and while it has a few things that you have to get past, there is a lot more good than bad and when it is all done this movie just makes you feel better about the world.