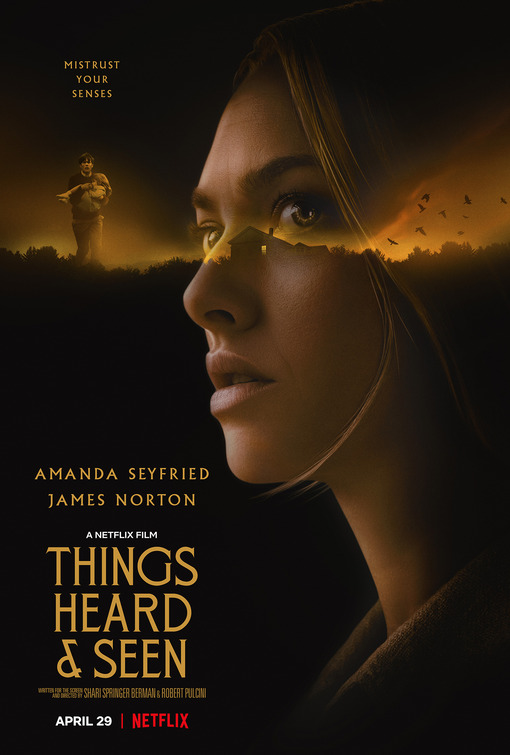 Some would say a good marriage is when two people make sacrifices for each other for the good of the relationship. It seems that is what George Claire (James Norton ) has been doing so that his wife Catherine (Amanda Seyfried) could finish school. Now, when George is offered a teaching position it is her turn and with their four year old daughter they movie to picturesque Upstate New York. Of course if you are moving to Upstate New York you buy an old farm house that has good “bones” to it and a little dark history to boot.

Everyone settles in nicely, George quickly becomes his school’s most popular professor and Catherine makes that old home pretty homely, but then some strange things start happening. It doesn’t take long for Catherine to realize that they are not alone in the house while George plays the non-believing husband to a tee.  At this point in the story written for the screen by Shari Springer Berman and Robert Pulcini from Elizabeth Brundage’s novel All Things Cease to Appear  you might think you are about to watch a good ghost story, but you would be wrong. While the first half of the story has some typical jump scares and some paranormal activity, the second half of the movie plays like something you have seen way too many times. George soon goes from the doubting husband to the husband you wish bad things on. The cracks start to appear in Catherine and George’s perfect appearing marriage when George meets a young girl names Willis (Natalia Dyer) and you can tell he wants to do more than chat with her. Then the shine really falls off of George when you learn he has even more secrets that he’s been keeping.

It is at this point where Things Heard & Seen becomes filled with all too familiar troupes and is pretty predictable by the films end. Pulcini and Berman also direct the film and provide a PSA to tell everyone that sometimes two heads are not better than one. That is unless their main goal was to make you hate the character of George, then mission accomplished, but if it was to make an entertaining horror film, they failed in that. The cast gives you hope with a couple of legends in F. Murray Abraham (Amadeus) and Karen Allen ( Raiders of the Lost Arc) joining Seyfried and Norton, but no matter how much they practiced it, the screenplay is just too weak to carry the film, so safe to say Carnegie Hall is not in their future (F. Murray Abraham joke). This film isn’t scary at all and its third act supernatural arc feels unearned as it doesn’t put in the work for it. Add the mystery part that fails to add any tension to fuel it with its predictable path and it fails in two of the three genres it is labeled as, the third one being drama, which it barely passes in that area. This film is not better heard & seen, instead save yourself some trouble and ignore this one completely.