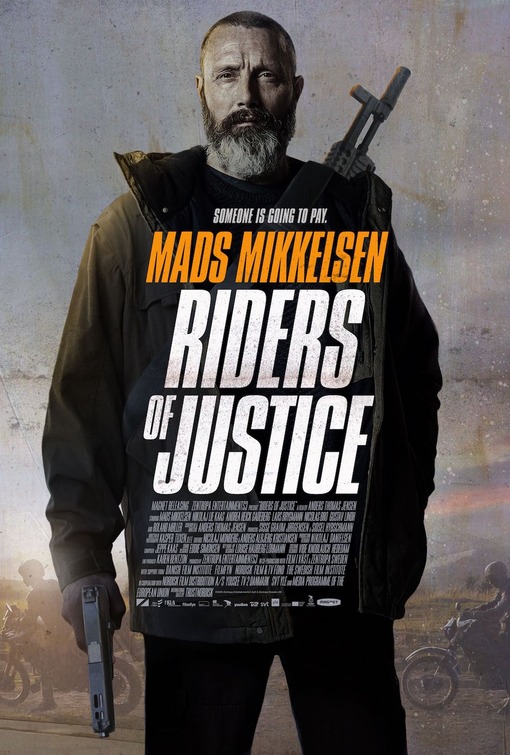 Mads Mikkelsen just seems to elevate any movie he is in, so watching his latest release Riders of Justice  the expectations were high. The good news is that it exceeded those expectations and what we get is a everything you look for in a movie, and then some. Mikkelsen plays Markus, a military man who is stationed away from his family. Meanwhile his wife and daughter Mathilde (Andrea Heick Gadeberg) are at home making the best of his absence. When they learn that he will be gone a little longer they decide to take a trip into town to treat themselves. That trip ends in an accident that takes Mathilde’s mother and brings Markus back home to care for her.

Everything about what happened looks like an accident, but one man named Otto (Nikolaj Lie Kass) thinks it was planned. After a failed attempt to get the police to listen to him, he and his friend Lennart (Lars Brygmann) decide to go tell Markus their belief of what happened. This of course enrages Markus and he wants revenge and it just happens Otto and Lennart have a couple skills that can help him, they are good with computers. So together they form a team to help Markus out, even adding Emmenthaler (Nicolas Bro) because of his face recognition software to the group. At this point I would have been good with Mads just kicking ass the rest of the movie, but Riders of Justice  becomes something else, with still plenty of ass kicking. What Andres Thomas Jensen (Men & Chicken) does is deliver a film that is just a joy to watch and gives us something with heart, laughter, and some mean gun work. There is almost a perfect balance of dark comedy and a darker human drama that is seen in the relationships between Markus and his IT support. It’s that relationship that is the spine of the film and when you add the beautiful father and daughter story, you get something special.

For Markus though he has tunnel vision on what he wants as he slowly starts to hunt down the group that he thinks is responsible for the death of his wife. Revenge though doesn’t always go as planned and there are more than a few hiccups with this one, but is it enough to foil his plan? Riders of Justice is not at all what you expect it to be. From the trailers you look to be getting a version of Taken, and there is some of that but Mikkelsen gives you that plus a healthy side of The Lone Gunmen ( for you X- Files  fans out there), so you get so great action with some laughs. While sometimes the humor is pushed too far, which at a few times undercuts protentional powerful emotional points, those moments just cast a small shadow on an otherwise good movie. If you haven’t been introduced to Mads, this is as good a movie as any to be your entry point. Not only will you be sucked in and want to see everything he has done, you will also get a chance to see a solid movie before they remake it here in the states with, oh I don’t know, maybe Liam Neeson?