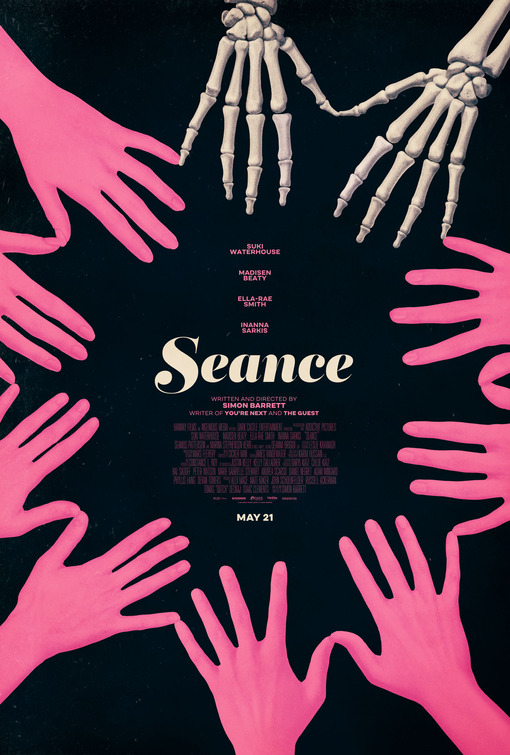 Right now at some fancy all-girls school, a group of girls are standing in front of a mirror in a dark bathroom trying to summon a evil spirit. That is exactly what is going on at Fairfield Academy, but when things go wrong and one of the girls jumps out the window, things start to feel a little more real. From the mind of Simon Barrett, who was the writers behind films like You’re Next  and The Guest comes a new type of horror and this time he’s not only the writer, but  also the man behind the camera. For Seance  he gathers a young and up and coming cast and puts them in a terrifying situation and the results are a genre mashing not too bad of a time.

After the window incident, Camille (Suki Waterhouse) becomes the new girl, even moving in the room that it happened. Camille doesn’t get off the right foot with the popular girls when she sits at their table, uninvited, which  doesn’t sit well with them. After a little pissing match and some slapping, the girls get in trouble and are forced to spend some time in the library sorting books. It is while they are there that Alice (Inanna Sarkis ) decides to have a séance, something that never goes well. Of course they reach a spirt and bad things are told will happen and soon one by one the girls start to meet their doom. All of this of course points to that faithful night in the bathroom as Camille is seeing and hearing things that are not normal. Of course no one believes her, because these girls have been playing jokes on each other for scares for way too long. This is the biggest problem with Seance, there are no likeable characters, as I spent the movie actually rooting for some of these girl’s deaths. It’s not just some of the girls as it even plagues the ones you are supposed to like, as the main character Camille feels a little off. This didn’t make me enjoy the film less, it just takes the edge off each time one of them met their demise.

Of course the bad things that the spirt predicted happens, but it might not be that evil spirt that is responsible. Instead, everything things comes to a Scooby Doo moment in which you almost feel someone is going to state how they would have gotten away with it, if it wasn’t for those pesky kids. Right when you think Seance is going to that place, it instead throws you a curve ball in the final act  and delivers a pretty good twist. Barrett likes to tinker with formulas and with Seance that tinkering pays off. My only problem lies in the characters, as I wish he had provided at least one that was worth rooting for. As a horror film it checks the boxes and has a few good scare moments, one especially that will have you checking those dark corners of your room at night. Other things that stood out is the gorgeous cinematography from Karim Hussain and a fantastic score by Sicker Man that really sets the mood. Seance would be great to see with a crowd, but if you can’t make that, turn the lights off and get comfortable, just check your room with the lights on before you go to sleep.