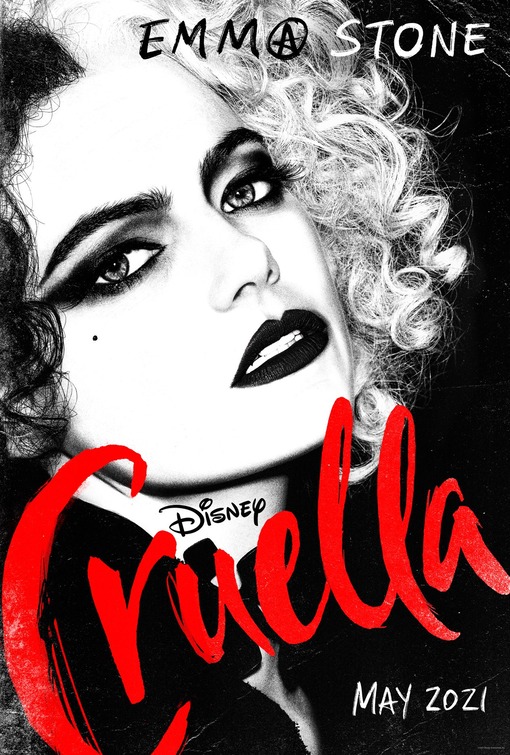 Growing up and watching all the Disney films I did, not very often did I want to know what made their rouges gallery become their wicked selves. Now, after living life, I have a feeling what could make someone do things like give a poison apple to someone or want to turn 99 puppies into a coat. Not to say I am going to rush out and do any of those things, but I at least get what would make someone like Cruella de Vil do what she does. Someone once said “a villain is just a victim whose story hasn’t been told” , and this is Cruella’s story.

Cruella (Emma Stone ) wasn’t always bad, she was just drawn that way and if you remember her from the 1961 animated film 101 Dalmatians or the live-action version played by Glenn Close in 1996, she was pretty bad. Well Cruella used to be just plain Estella and while she has lived a life of crime to survive all  she ever wanted to do is to design clothes. Stealing people’s wallets and other things with her friends Jasper (Joel Fry) and Horace (Paul Walter Hauser) is good enough to get by, but it’s not what she wants. Luckily for her, Jasper is going to help change that, as he gets her an entry position at a very popular department store, or as some might call it a ‘foot in the door’. Things don’t go as planned, but after an impromptu window dressing, she does catch the eye of The Baroness (Emma Thompson), a fashion icon who gives Estalla a job right away. Of course Estalla starts to make her mark, because she is after all talented, but when she discovers a truth another side of her comes back in Cruella and she is done playing nice. With killer needle drops Cruella wants to be punk but try as it may, it really lands more in the pop- punk world. That is not a knock, because you could never put Emma Sone’s Cruella in a box, she is made to soar. As fun as Cruella is, it all comes down to the battle of the Emma’s, with them both making cruelty look oh so good. Stone looks like this role was made for her and with a career of great performances under her belt already, this one you will remember. The story written by Dana Fox and Tony McMamara puts you squarely on Cruella’s side and no matter that you know what she will eventually do, you are totally team Cruella here.

Back to the battle of the Emma’s though, as Cruella comes out to play, The Baroness goes into survival mode as she will do whatever it takes to keep her place at the top of the food chain. Being young and motivated though can trump most things and it all sets up a finale where Cruella de Vil is revealed. Where some might compare this film to Joker, they couldn’t be more different. Where Joker made being crazy not the best of times, Cruella revels in its cruelness. Helped by a killer soundtrack that just seems to nail the perfect song for a scene and Emma Stone and Emma Thompson just oozing charisma, being bad has seldom looked so good. From the opening scene, all the way to the mid credits, this movie had its hooks in me and I can’t wait to get another dose. This could have gone a different way, but the chosen path was the correct one, because I am now team Cruella all day long.