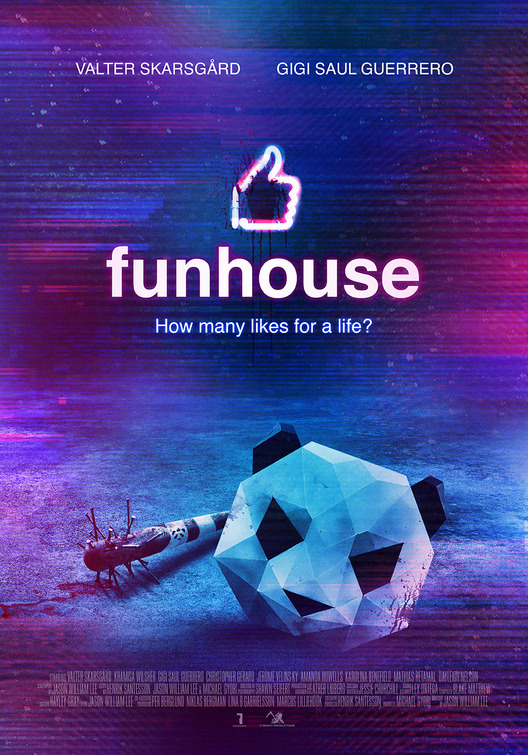 For some there is nothing worse than a reality TV show, except maybe one other thing, a horror movie about a reality TV show. If this is nightmare fuel for you, remember this name: Funhouse, a title that is quite misleading as there is nothing fun about it. Somewhere among the D-list celebrities and social media influences there are ten lucky, or unlucky people, who are chosen to participate in a new reality TV show. This show is not about someone finding their future mate or hitting a note that wows an audience. No this show is about survival and the key to that is all about your “likes”.

The joy of Funhouse is it gives you eight people you could care less about, because they are all people you secretly wish bad things would befall them. There is Kasper (Valter Skarsgård), they guy who was once married to a pop star,  as well as Lonnie Byrne (Khamisa Wilsher), who lost on a show she was supposed to find her mate. While most of the others are just people who don’t matter, including an ex-MMA fighter and a guy who comments on viral videos, and of course the attractive girl who takes a lot of selfies. After you get past this group you are left with the quiet one in Cat (Amanda Howells) and the rest I won’t mention because you won’t care if I do. At first they are excited for what is to come, but more so for the five million dollar grand prize for the winner. Little do they know the game is to the death and while there will be one winner, the rest will have their ticket punched. Funhouse tries its best to give you some Saw like moments with its kills, but much like that franchise, most of them fail to deliver any shock value. That lies really at the feet of writer/director Jason William Lee, who gives Funhouse an ultra-cheap feel, which resonates everywhere. Another fault is that the story, which even has as the cops race to find out where the location is, fails to deliver any suspense or tension. And everything plays out just how you think it would.

For Funhouse, the list of things that don’t work is too long, but I will focus on the few things that I liked. Some of the deaths, like an updated version of the rack and being placed in a container of acid was kind of nasty and nasty kills in a horror film seem more on brand. That though is about the only good thing to say and not even a little twist in the ending, all which wants to set up a “Jigsaw” like villain, fails to impress. There is nothing I can compare this to too try and sell it, as it is really is lesser horror that will fail to score points with any fans of the genre.