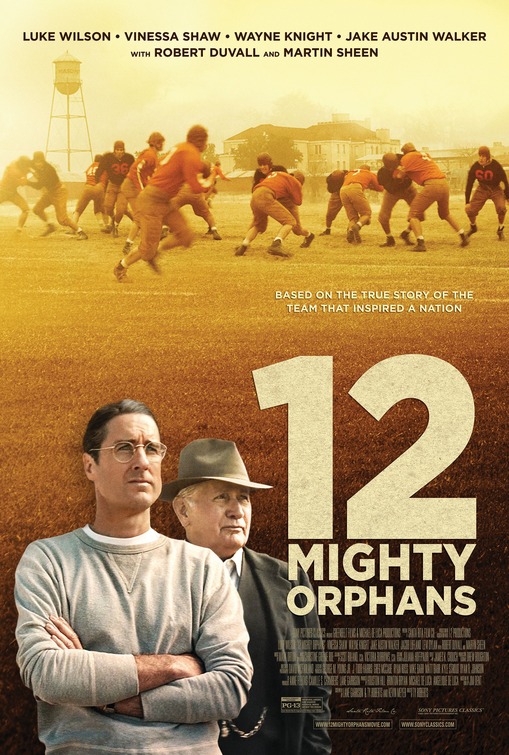 Some people would say that they go to the movies to escape the real world and of course to be entertained. For me I see plenty of movies, but sometimes I just want a movie that makes me feel good and tell me one of those David vs. Goliath stories we all love to hear. The latest offering to give us those warm and fuzzy feelings is 12 Mighty Orphans. Because everyone loves a story about an orphanage and its football team. It all starts in the late 1930’s and The Masonic Home has got a new math and English teacher. Numbers is not the only game he plays, as Rusty Russell (Luke Wilson) is also a football coach and he intends to bring that game to the Home. The problem is these kids have never played the game, so with the help of the schools Doctor, Doc Hall ( Martin Sheen), they get to work learning to play.

This is where things become pretty formulaic, as the story written by Lane Garrison, Kevin Meyer, and Ty Roberts, the later also directing keep everything on familiar ground. As the team is built, it seems like obstacle after obstacle is placed in front of them, making it hard to even get on the field. There is the evil teacher Frank Wynn (Wayne Knight) and the coach from another school named Luther (Lane Garrison , who both seem to just enjoy being that guy no one likes. If these two are not enough, Masonic is barely able to build a team, one with only twelve guys and who are all a lot smaller than your average Texas football player. This is when the feel good things start to happen, without knowing the story, you know they are going to lose the first game, only to have things turn around. Roberts, who last made The Iron Orchard feels like the right guy to deliver this story, but never finds a way to make it special and the real story is just better than what we get. I mean you are happy with how things turned out for all the boys and what this meant to them in life, but as a movie, while the “feels” are there, mostly it will just make you want to learn more about this team. The cast, as good as it is, with names like Wilson, Sheen, and Duvall, but like the movie they deliver generic performances, nothing bad, just you could plug anyone in these roles as they have much to do.

Of course The Mighty Orphans, as they would be called, would make it to the state championship and what happens, well I will leave that up to you to discover the outcome. 12 Mighty Orphans, while predictable, and  not very memorable, will remind you that you love watching David beat Goliath, even if you have seen it done better before.