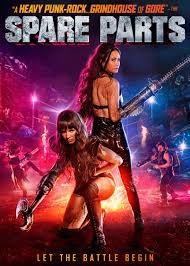 If you have often wondered what Gladiator would be like if you set it during modern times and with women instead of men who are forced to fight, then Spare Parts might be for you. Of course you have to make it interesting and that is done here by having each woman have a body part removed and replaced with a weapon. Because, well, why not? Everything was not always so dark, as this particular set of girls that are set to entertain a cult were a punk band called Ms. 45. They just picked the wrong club to play is all.

It is at this show that things go a little crazy, when a fan tries to get a little too close to one of the girls and she does not react well. The band consists of Amy (Michelle Argyris), Emma (Emily Alatalo), Cassy (Kiriana Stanton), and Jill (Chelsea Muirhead)  all who because of what type of clubs they play, can take care of themselves. When their show ends early because of the brawl that breaks out, they do a little meet and greet after where they encounter the fan who gets a little too close once again. This though is not some normal deranged fan, but instead a sort of recruiter for a group of people who like to kidnap and then make those unlucky souls fight to the death. It is after a road rage incident that the members of Ms. 45 wake up in a place that is unfamiliar and they are changed in ways that is not going to help their music careers. This is where the story written by David Murdoch and Svet Rouskov starts to do its best Gladiator impersonation only if Gladiator ended up being not as cool as it looked. That is what happens to Spare Parts as the idea sounds a lot better than what the finished product becomes. While the four leads are solid, the film really lacks the energy to do the things it wanted to do, as some of the characters play it like they are mailing in their performances. You add the screenplay’s reliance on genre troupes that have the ‘been there done that’ feel to them and you get a movie that is almost tired of itself.

For me Spare Parts never lives up to its concept. The movie which is 91 minutes, drags on too long and even the fight scenes found a way to disappoint me. If you are going to make a genre movie like this you need to go full genre and Spare Parts only does part of the work and never fully commits to its own ideas. I wanted to enjoy this film, but mostly, I was not entertained. And while the film starts with a little edge to it, the rest of the film ends up turning in the bare minimum.