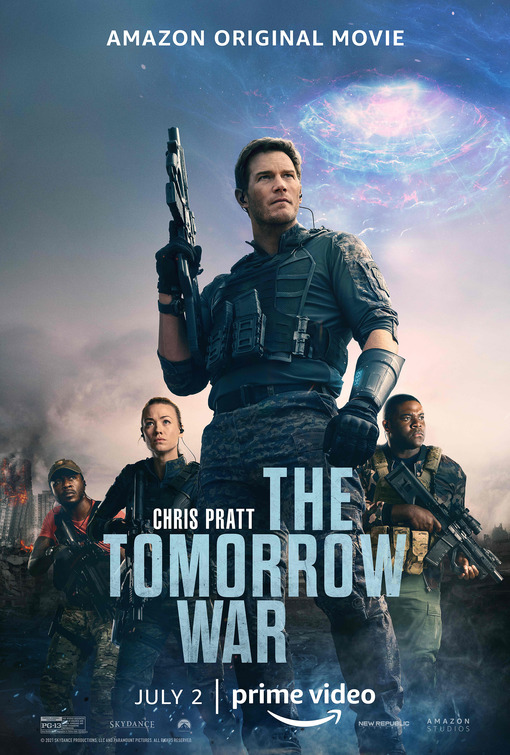 It is said that the future is what you make of it, but the future in The Tomorrow War, there is not much of the planet left to make. In the year 2051 the human race is on its last leg as it battles an enemy that is wiping us out. The solution is to travel back 30 years and recruit the people of the past to join the fight to save the future. But confused and unsure many refuse the call and a draft is created, because when your military can’t defeat the enemy, send us your gardeners, and your math teachers to help fight for survival.

One of those math teaches is Dan Forester (Chris Pratt), who when he is not trying to get his students to listen to him, he is being the “cool” dad. Forester though was not always a teacher as in another life he was a squad leader during the Iraq war, something that will be very helpful in his next endeavor. You see it is his turn to be drafted, which really makes you wonder how they are choosing people to go, a question that gets somewhat answered later. For now he is told he has 24 hours to put his life in order and to report for duty, where he will be sent 30 years in to the future for a week to battle. Don’t worry if you are a little confused by all of this, screenwriter Zach Dean has put plenty of exposition in to help you understand just what is going on. Pratt who has become the action hero we deserve, has taken the time off from saving us from dinosaurs and Thanos, to protecting us from some sort of alien called White Spikes. While the film starts when we think we are getting thrown right into the action, it turns out that it’s going to have to wait as we have to find out how we got there in the first place. The Tomorrow War is pretty much broken up into three parts, the present, the future, and back to the present, or is it now the past? Whatever. You care less about the logistics when people are blasting aliens. And while it feels longer than it should be, it does use it’s time wisely, which is good since it’s almost two and a half hours. Chris McKay, who directs, delivers a film that brings back memories of Independence Day, minus our national monuments getting blown up.

I am all in for a good alien invasion film and The Tomorrow War is just that, with a dab of time travel to take it up a notch. This, two years ago would have been a big summer movie at the theaters, but in our new world it’s available on Amazon Prime, which strangely enough doesn’t feel big enough for this movie. The sets in the film are massive and all I could think about as I watched it was they thought that bigger is better, but everyone will be watching at home. I am also still not 100 % sure if I am sold on Pratt being the hero who is going to save all of us, but he does have this “everyman” vibe to him that makes it appear like he is just in the right place at the right time. Over all this one delivers as a summer blockbuster,  the kind of movie where you just sit back and enjoy, no thought required. Lots of movies that come out during this time want to be a Summer King when they grow up and The Tomorrow War pushes hard for that dream, even if it does it on the small screen.

Summer of Soul (...Or , When the Revolution Could Not Be Televised)