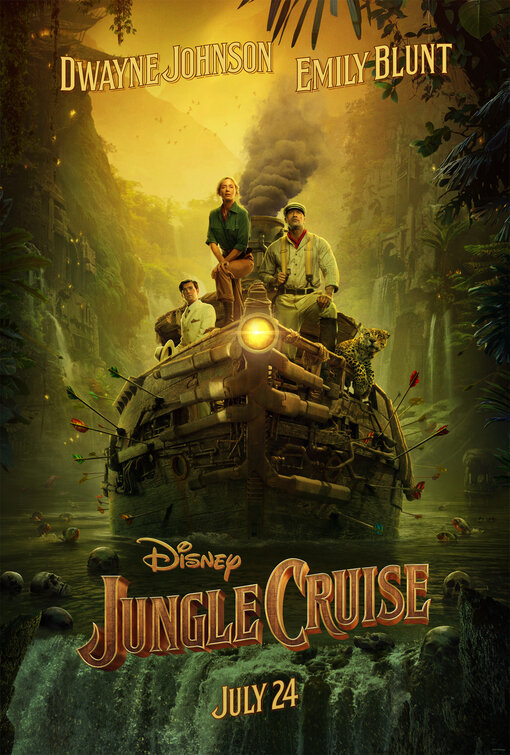 “ Based on a Disneyland theme park ride” would have been a laughable idea for a movie twenty years ago, but that was before Jack Sparrow. Now in a post Pirates of the Caribbean world, any ride is a chance to a new adventure and the newest one takes us deep into the Amazon. Set in a time when women were still not allowed into men’s scientific clubs, Lily Houghton (Emily Blunt) is not going to let that get in her way of discovery. After retrieving an artifact rather nimbly, she and her brother MacGregor (Jack Whitehall) hop on a boat and head to Brazil to look for a flower with the power to heal. Every good explorer needs a guide, and when in a foreign land, the perfect traveling companion lands like a rock in her lap.

That skipper, or how Lily ends up calling him, “skippy” Frank Wolff (Dwayne Johnson) has the boat and the knowledge of the river to lead her to the destination she seeks. However, no treasure is ever looked for by just one person, there always has to be someone who has a much more sinister purpose and of course he is German and he goes by the name of Prince Joachim (Jesse Plemons). So the race is on, lucky for Lily, she found herself a pretty good skipper, one who has a lot of dad jokes and a few tricks up his sleeve . Written by Glenn Ficarra, John Requa, and Michael Green, Jungle Cruise hopes to be Disney’s next adventure in the spirit of National Treasure or the Pirates series before Gore Verbinski left the series. While I can see why they would want to be on those films level, Jungle Cruise really has more of a 1999’s The Mummy vibe all over it. I mean if you close your eyes you can see Brendan Fraser and Rachel Weisz fighting their way through the Amazon with John Hannah in tow. This, in my eyes, was the perfect film to want to be like, and Jungle Cruise  does the best imitation which is the best form of flattery. The action is constant and director Jaume Collet-Serra (Orphan ) uses his experience in both the action and horror worlds to deliver a fun ride. Of course having Blunt and Johnson as your leads, who I want nothing more than to see a series of films of them taking adventures together, not much is going to go wrong.

Sometimes you watch a trailer and get the feel for what a movie might be, with Jungle Cruise it puts everything out in the open and you get exactly what you came for. You get adventure with a capital ‘A’ and a chance to see someone eclipse Johnson eveytime he is on the screen in Plemons, who takes being bad and makes it memorable. With those three operating at full movie star steam ahead, you get a ride that when it is over you will want to get right back in line for it again. I was ready to buy anything this one was selling and it did not disappoint. This is by far the best Cruise you can take on dry land.