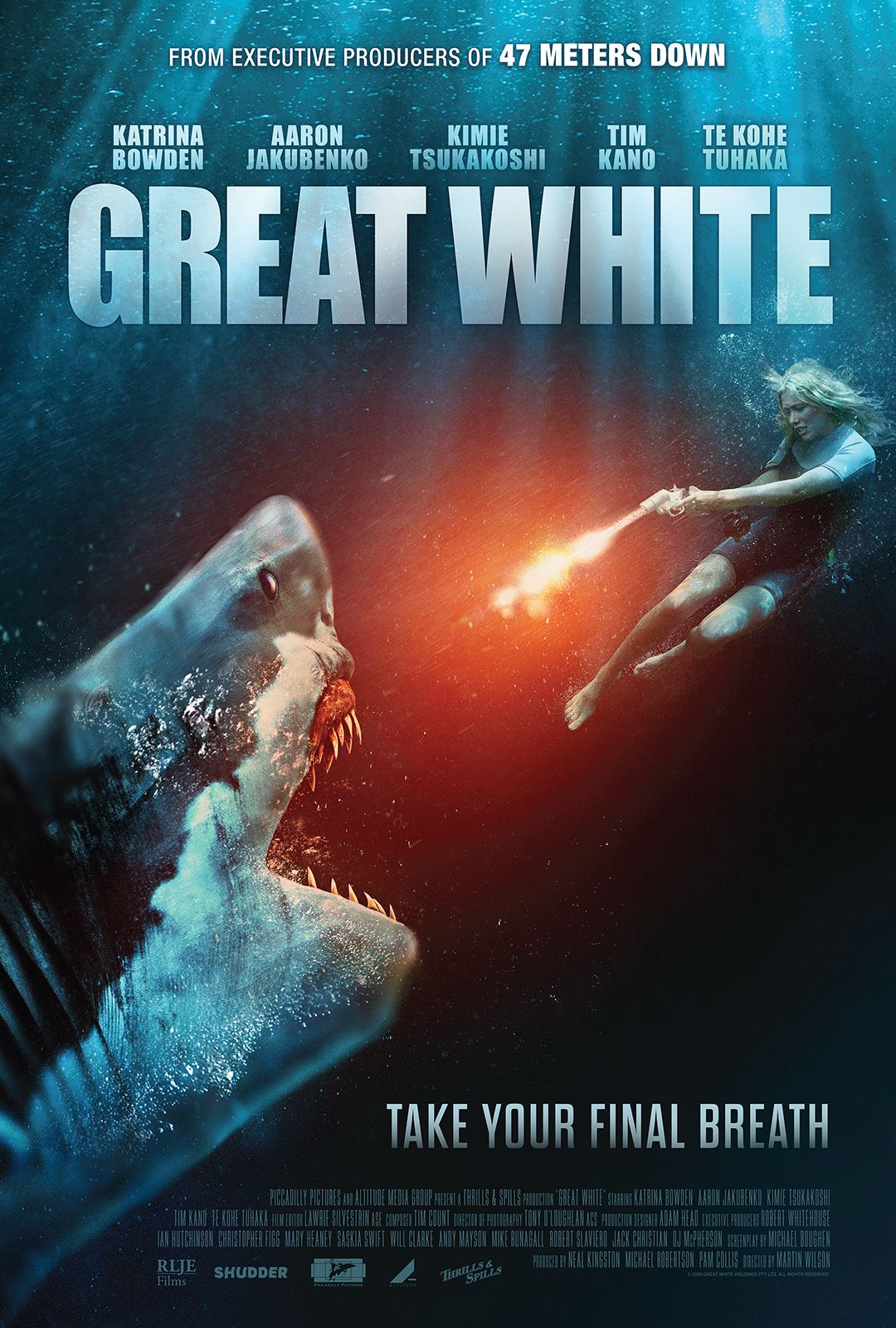 At this point in time any movie involving a shark is not trying to be Jaws, because let’s face it, that’s impossible. They are just trying their best to not be worse than all the sequels. The latest to “test the waters” is Great White as it starts with a basic premise and adds killer fish. Things start off nice and rosy, Charlie (Aaron Jukubenko) and Kaz (Katrina Bowden) run a charter company, with Charlie being the pilot. Things are not going well financially, but just when things were looking grim, they get a call that will hopefully change everything.

When the next day comes, Michelle (Kimmie Tsukakoshi) and Joji (Tim Kano) arrive and off they go, Charlie, Kaz, Michelle, Joji, and Benny (Te Kohe Tuhaka), who is the cook as they head for the destination. It is on this island that things take a turn as Michelle discovers a body with missing legs that kills the mood pretty quickly. So with the trip cut short (heh), everyone piles back in the plane, but Charlie and Benny want to look for the boat that this poor guy was on. After flying around for a bit they find the boat and the rest of that guy’s girlfriend, but that isn’t the worst thing that is about to happen to them. Just like that, in what might be one of the worst CGI sharks ever, the plane is attacked and down she goes. Lucky for the passengers Charlie is pretty cool and he and Benny get everyone to safety on a raft, now they just have to get to land. Written by Michael Boughen, again Great White is trying to be better than Jaws 2, 3, and 4, but the story often makes you wonder if it is trying at all. What I started to wonder about half way through was, how do you miss when you put your characters 150 miles from shore on a raft while being hunted by sharks? As it seems pretty predictable that at least three out of the five won’t see land. And while you can take your pick who will become a shark dinner, the wait time for those demises and the kills themselves will leave you yawning, as most are done off screen.

There is not much going for Great White, but all of its flaws are self-inflected as Boughen and director Martin Wilson seemed to actively make a bad movie. The funny thing is that I am all in for a cheesy shark movie, but this one makes it hard to go along as some the things they do don’t even make silly-movie sense. There are a lot of over head shots, that show the sharks waiting for the perfect time to attack, which is what a lot of this movie is, a lot of waiting. I never want to see a shark fin coming my way, but in movies, minus a good score, there isn’t a lot fear or tension. In the end, of all that this film is lacking, the most unfortunate one it’s missing is being entertaining. Shark movies are a dime a dozen and while I think any movie would be better by adding a shark, there is always something that comes along to prove otherwise. Great White is that movie, that with a great setup somehow misses badly and may make you question why you took this dip in the first place.