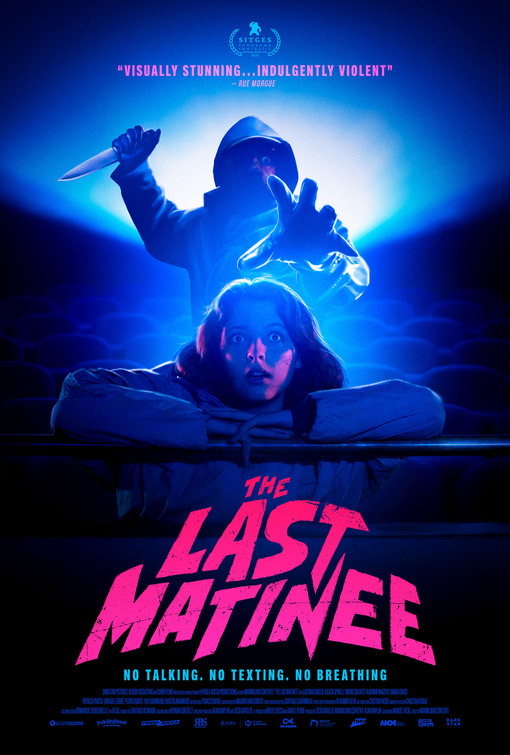 On a rainy night a group of strangers seek refuge in a movie theater to watch the last film of the night. This isn’t your everyday multiplex, no this is one of the great movie houses of old with its fluffy carpets  and wide stairs all set in a spacious theater. There is nothing like watching a movie with a crowd and while the rain or the choice of movie might have kept the audience small, not everyone is there for the feature. Upstairs in the projection booth, Ana (Luciana Grasso) fills in for her father as she uses the time to study for an exam, but the night has much more installed for her.

Inside the theater there is a quite a few characters, none that are given any type of development, but they do have some individual characteristics that differentiate themselves from one another. Mixed into the crowd is a man in a black rain coat and he has eyes on something else other than what’s on the screen. While the movie plays and everyone is distracted, the mysterious man sits behind an older man by himself and kills him. This man, beside the younger boy who snuck in and is watching the movie mostly through his covered eyes, are the only two alone. The film takes the classic path of a slasher, where sex and consumption of any substance are met with punishment. Most in this theater will meet their end in a brutal way, while some might survive, but not before a fight for their own lives. The Last Matinee is a slasher through and through, Maximiliano Contenti, who both wrote and directed the film drenches it in giallo colors as a tribute to the Italian genre that influenced the slasher films of the eighties. Set in 1993, The Last Matinee is soaked in blood as well as nostalgia, when the matinee was king and splatter films was just nearing parody level. While it might take a little while to get going, you can easily forgive the film, because the atmosphere is so right that you are able to look past its flaws.

The Last Matinee is a film that fans of the genre will be on board with, with its attention to details that those fans will recognize and appreciate. One of the things I enjoyed the most was how the film playing on the screen would have certain parallels with what was going on in the theater. As a fan of films like this, I have to say that I was into it myself and even if you don’t care much about the characters or the lack of a story, if you love a good splatter film, this will certainly take you back to that magical blood-dripping time.