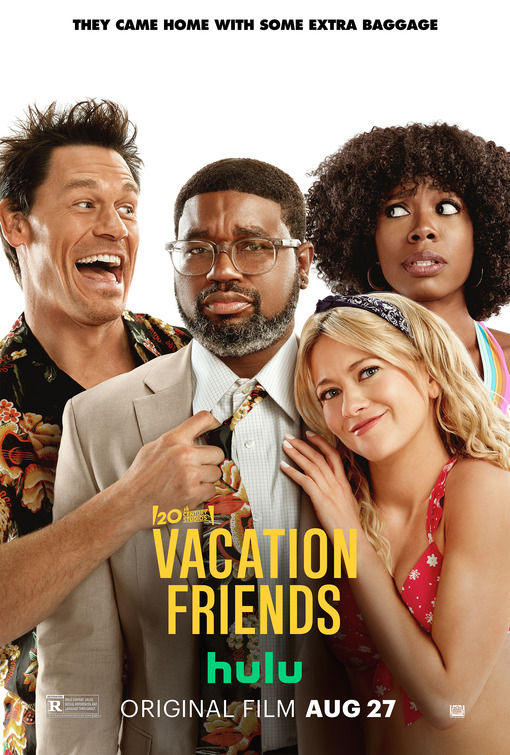 I feel like vacations should be like an alternate time of your life, for some of us it is. I understand that some just like that YOLO lifestyle no matter where they are. For the purpose of laughs, Vacation Friends decided to take someone from the YOLO crowd and pair them with someone who could be the poster child for “uptight”. In other words, let the shenanigans begin. Marcus (Lil Rel Howery) and Emily (Yvonne Orji) are going on a very planned vacation, at least that what Marcus thought.  You see this is the trip that Marcus plans to ask for Emily’s hand in marriage, but things don’t quite go that way. After an accident with a jacuzzi, their room is flooded out and they are about to be stuck at the airport Best Western if not for two kind souls.

Those angels who arrived at just the right time are named Ron (John Cena) and Kyla (Meredith Hagner) and they offer to let Marcus and Emily stay with them. Of course Ron and Kyla only seem like angels, but it doesn’t take long for Marcus to see them as the devil. That will happen when you are enjoying a margarita and discover the rim is covered in cocaine and not salt. For the rest of the trip it’s all about that life for Marcus and Emily as days of knowing when to say when have come to an end. It’s all cliff diving in the dark, catamaran- wreck in the day that set this up to be a vacation to remember. When it is all said and done Marcus and Emily are ready to put it all behind them, but for Ron and Kyla this is a friendship that was meant to be. The script written by Tom Mullen, Tim Mullen, Jonathan Goldstein, John Francis Daley, and Clay Traver, the later also directing has been around long enough that it once had Nic Cage and Will Smith attached to it. Some of that age shows in the jokes, but they also feel forced and everyone is trying too hard to bring the funny, well except John Cena. It is his over the top comedic performance that actually takes Vacation Friends to the watchable zone. Cena is just outright crazy and to be honest, a friend all of us need, as he is caring but can get you out of your comfort zone and of course really light up a party.

Once Marcus and Emily are back in Chicago their lives goes back to normal as they have a giant wedding to get to, with Emily’s family, who are not a big fan of Marcus. So when Ron and Kyla show up unannounced they set off a wedding that no one will soon forget. While there is some funny in this, I go by the thought that if you can’t take drugs and a fox hunt funny, well maybe you just aren’t meant to make a comedy. Cena carries most of the weight here, Lil Rel Howery’s straight-man role are just not up to par with Cena plus the lack of strong roles for the supporting cast really makes it hard to generate a lot of laughs. I know most vacations live by the mantra, “what happens here stays here”. I wish this would have stayed in development, but at least we will always have the John Cena memories to help a little.