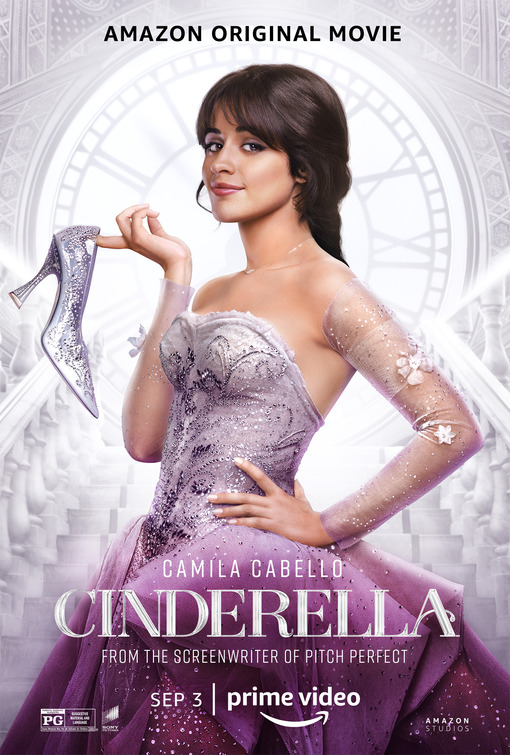 As you read a classic story to your child at night, you might come across parts of the story that maybe doesn’t fit with what you hope your child takes from it.  There was a time when people were more expected to fit a certain role, but in a day where anyone can be anything, telling a story like that might not fit like a glass slipper anymore. Cinderella might be one of the stories, but it doesn’t have to be bland or old-timey, just add some popish songs, a few dance numbers, and Billy Porter and you got a Cinderella that dazzles.

For this version, Cinderella, or Ella (Camila Cabello) to her friends is still the step child that lives in the basement. This Cinderella isn’t there to just wait hand and foot on her wicked stepmother, (Idina Menzel) and her two stepsisters Anastasia (Maddie Baillio) and Drizella (Charlotte Spencer ), no, this one has dreams.  Ella wants to make dresses and sell them in the market, but she can’t do that because women are only for marriage and to have children, silly rabbit. Ella is not having it though and when she finally takes a dress she made to market she is laughed at, except for one guy. Who happens to be Prince Robert (Nicholas Galitzine), and he is in disguise to find Ella, who he saw once and just had to know her. After buying the dress , he invites her to a ball he is throwing, not for him though, for the business opportunities, as she can show off her work and maybe make her dream come true. The ball happens, they fall in love, and she has to leave in a hurry, only leaving a glass shoe behind to remind everyone that she once existed. Look I love the old story, and I get why you would want to tell a more modern and progressive story, but this is not for me.

Kay Cannon (Pitch Perfect), who wrote and directed the film uses a mixture of pop songs and original numbers to tell a story of a woman who doesn’t need a prince to get her “happily ever after”. The songs have some potential but to me what doesn’t work are the pop songs that feel shoe-horned in and are unabashedly corny.  What does work for me are some of the casting choices, led by Bill Porter as Fab G and Pierce Brosnan as the King stand out the most. Even with its many flaws, Cinderella is still enjoyable in its own way with its uplifting songs about following your dreams. There is also the problem of patchy performances that really serve as a weight on the story. I am sure there is an audience for this movie, but I am not in that group and as the film made its way through to the end, I couldn’t help but look at my watch and hope midnight would come a lot sooner than it did.

Shang-Chi and the Legend of the Ten Rings