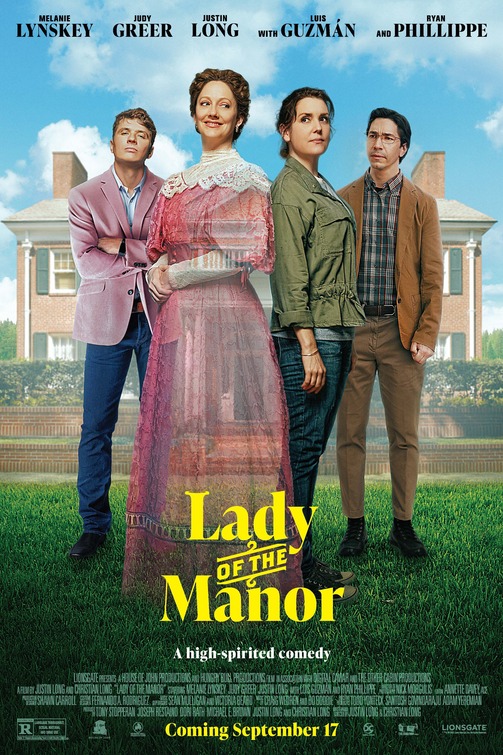 Like a meal, a movie can sometimes come with some weight, meaning it won’t leave you anytime soon. Sometimes though you want something light and say “fluffy”, so that you can just enjoy and move on. Lady of the Manor, the new film from writer and directors Christian and Justin Long  attempts to do just that and does so with ease, now if they could have only made it better. Hannah ( Melanie Lynskey) is not really applying herself at the moment as she lives with her boyfriend while delivering drugs as a job. Notice how I said delivering as she is not selling, something she is quick to point out to her boyfriend. After a delivery goes wrong, which leaves her in jail and having to register as a sex offender, she finds herself with a job opportunity that could be what she needs.

This job is to play a character in one of the oldest houses in Savanah and while she might be under qualified, her boss, Tanner Wadsworth (Ryan Phillippe) , who owns the house, kind of has a thing for her, which covers for her mistakes. Someone though is not as forgiving and that is the ghost of Lady Wadsworth (Judy Greer), who has decided to haunt Hannah and try and make her the lady she clearly is not. Things get off to a rough start with Hannah and the ghost, because the ghost always shows up at the worst of times, but that soon starts to change. Filled with a great cast that includes Lynskey, Greer, Phillippe, Long, and Patrick Duffy Lady of the Manor  has a lot going for it. Lynskey is really given a chance to shine and she is often the best part of the movie, that is of course only matched by when Greer shows up. Where things fault is while characters don’t have to be really likeable, and none of these really are, they have to at least be interesting and that is not what is going on here at all. While Lynskey provides all that is good, her character is not someone I would want to spend very much time with as all she really offers is being lazy and void of personality. When I say Lynskey is the best part, I mean it, but it is also not saying much. It also feels longer than it should have been, which when you don’t really like anyone you see, makes watching it a more of a chore. The good news is that there are some genuinely laugh out loud moments, but those are not enough to make up for the film’s faults.

As much as I have railed against this movie, while still pointing out the enjoyable parts, Lady of the Manor isn’t really worth getting the ol’ steam under the collar over as it is harmless yet well- intentioned. It really is just bland and it’s just disappointing that a cast this good didn’t get something more to work with. What we end up with is just imaging what we could have gotten, while having a few giggles along the way.