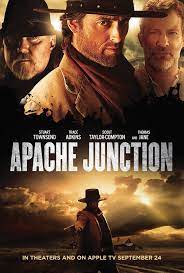 I always enjoy a good trip to a saloon to step back into a genre that rarely lets me down, a good ol’ western. Stories that take place in the Wild West involving gunslingers, betrayal, and great facial hair is hard to not make exciting, that is unless you are Apache Junction.  Written and directed by Justin Lee, Apache Junction ends up being a movie with about as much life in it as a person who actually lived during that time, or another way of saying not much at all. Annabelle Angel (Scout Taylor-Compton) is a reporter from the big city of San Francisco and she has come to this part of Arizona to write a story about the men that inhabit it. With her guide she is taken to an army outpost where she meets Captain Hensley (Trace Adkins), who gives her the of the law of the land. I seems that the army and the town have an agreement, where the town of Apache Junction is a free zone, were criminals can live peacefully, without the fear of being hunted.

When Annabelle gets to town she heads to the salon and meets Al Longfellow (Thomas Jane), the bartender and owner of the establishment, who tells her a little about the town. While there she watches a man named Jericho Ford (Stuart Townsend) win a gunfight, all of which will make great material for her story. The town though is not used to such a pretty thing being in town alone, as the only women in town are the kind who exchange services for money. So when a group of soldiers run into Ms. Angel, they attempt to have their way with her, but Jericho Ford comes to the rescue, killing two of the soldiers and of course ending the peace the town has had. For a town in the middle of the desert, the people of Apache Junction have some mighty fine clothes that look like they just came from the dry cleaner. That is not the only dry thing as much of the dialogue suffer dryness and feels recycled with lines like “He’s just spent too much time in the sand and snakes to know how to treat a respectful woman”. The acting is also colorless to the point that even the most polished actors can’t ring any life out of it.

While all of this is going on, you hope that the film will be saved by the grand shoot-out you know is coming between Ford and some guy with an accent named Oslo Pike (Ed Morrone), who just wants to kill Ford to make himself famous. Needless to say, it doesn’t and this story of the damsel in distress, dead friends, and a stale shootout never should have gotten out of the stable. I could get behind the idea of a reporter writing a story about some great outlaws *cough-Unforgiven-cough*, but Apache Junction is not that story, believe me there is nothing ok in this corral.