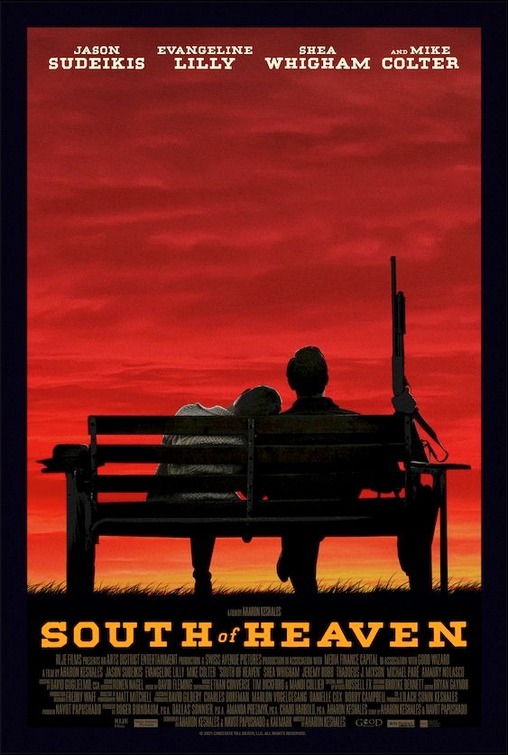 Most people believe in second chances, but for a convicted criminal that can be a tough thing to get. For Jimmy (Jason Sudeikis), he is about to find that out the hard way. After serving twelve years for armmed robbery, Jimmy is finally being released. Waiting for him is Annie (Evangeline Lilly ) who has her own sentence she is dealing with and Jimmy is there to keep a promise he made to her. Sudeikis who is best knows his comedy roles, including the lovable Ted Lasso, shows he has a darker side, something I am totally  here for.

Once out in the real world it doesn’t take long for Jimmy to find out that things work a little different now, even when you just want to do what is right. His parole officer Schmidt (Shea Whigham) doesn’t seem like a nice guy and even tells Jimmy that he is expected to do a job for him. Of course that job requires breaking the law, but how can you say no to a guy who can send you back to prison with one phone call. Jimmy doesn’t want to do it, but after some reminding of the power Schmidt has over him, he agrees to it. Written by Kai Mark, Navot Papushado, and Aharon Keshales, the later also directing, South of Heaven really delivers as a thriller, as well as a story that hits on its emotional notes. Sudeikis, turns in a solid performance, so does Lilly, Whigham, and Mike Colter, who should play more bad guys. Colter is Price who enters the picture after an innocent enough car accident that Jimmy gets into. It seems that motorists was carrying a large sum of cash for Price and he is not too happy that it is missing. Thanks to a tracker in the bike Price is led to a friend of Jimmy’s, who helped him get rid of the evidence, and who after a little persuasion, gives Jimmy up. That of course is the match that lights the fuse and becomes just another thing in the way of Jimmy trying to be the man he wants to be.

South of Heaven  has some good plot turns as it becomes clear that you are going to have to go west and east before you get to go south. This is just how we like our thrillers served and this one shines on every level. It has the feel of a Coen Brothers film even if it’s on the mild side, which is every bit of a compliment as it sounds. What would have taken it into pure Coen land, would have been the addition of a few more stronger characters, but for this purpose, the four leads are plenty to make this a really good film. South of Heaven is one of those movies you want to tell people about, because it could be harder to find. So here I am on my soapbox telling you in so many words, that this one should not be seen later on a streaming service, it deserves to be seen now, and is worth seeking out at your local theater.