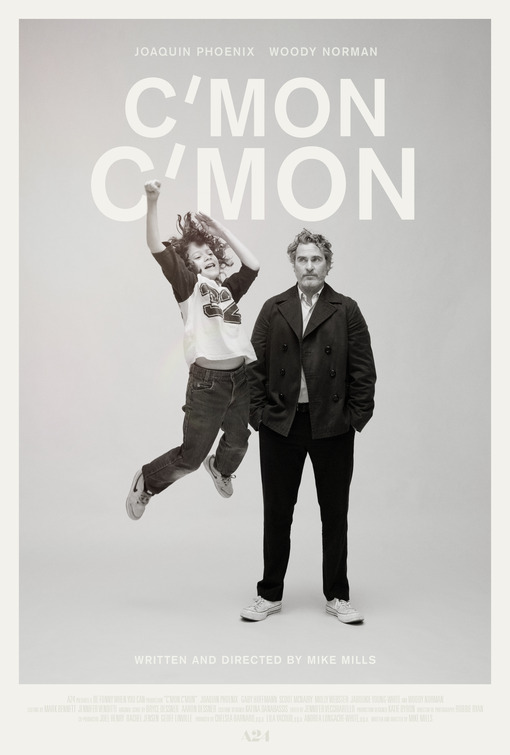 Growing up there is always that Uncle or Aunt you gravitate towards, because they are cool and you just want to be around them. As a kid you can long to be around that person, even if they might like to keep that time to a minimum, because after all you are a kid. I had that uncle growing up and when I got to be around him, I couldn’t get enough of his stories and of course grow up so that I can have my own stories like his. Sadly my stories became nothing like his, but I still remember those times I spent with him, which ended up being the most important thing.

Mike Mills, who has a true affinity for familial relationships as shown in his films Beginners and 20th Century Women both of which offer lasting impressions that can be taken into your own relationships. In C’mon C’mon, Johnny (Joaquin Phoenix) is a radio host who is currently traveling around the country and talking to kids about what they see for the future. At some point he talks to his sister Viv (Gaby Hoffmann), who he had a falling out with due to the care of his ailing mother, at the same time Viv is having some issues with her husband. While on the phone she mentions that she needs to find someone to take care of her son Jesse (Woody Norman ) and Johnny offers to do that for the few days she needs. Johnny hasn’t ever really spent time with Jesse, but Jesse seems pretty open to it. Phoenix, who won an Oscar just two years ago as The Joker comes back to a role that he is also quite known for. As Johnny he is natural, very subdued and easy going and takes on this role of being responsible for a smaller human with minimal protest. He easily rolls with the punches at what Jesse gives him and rarely loses his patience with him, even when he runs away just to get at Johnny.

Having a lead like Phoenix could make any actor feel smaller, but Norman is exceptional, who at twelve years old feels like an actor who has been around. While those few days become longer, Johnny is happy to take Jesse on the road as he continues the work he is doing. Soon they are in New York and New Orleans and as they make the trek around the country, Johnny and Jesse’s relationship progresses and the two become closer and their relationship is a joy to watch.

C’mon C’mon  is another film that shows that Mike Mills has an understanding of people that few do. Not only does he show both the importance and the burden women in our world carry, but he also treats kids not as puzzles that adults must figure out, but as people with a truly interesting perspective. Add to what you are seeing on screen the original music by Bryce and Aaron Dessner, which works perfectly and really sets the mood. I really loved C’mon C’mon and have no doubt it will show up as one of my favorite films of the year, it made me laugh, cry and more importantly it reminded me that it is safe to exist exactly as I am.