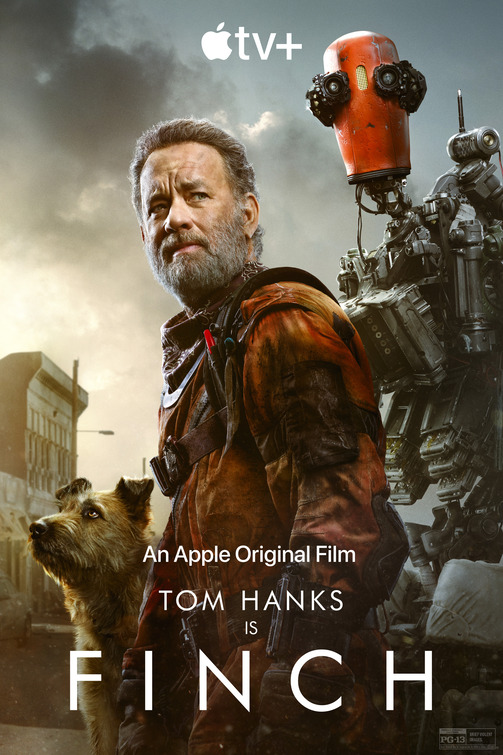 If someone told you that you could watch a road trip movie that stars Tom Hanks, a robot, and a dog, how could you say no?  That is exactly what Finch is going to ask you to do, and the good news it’s as good as it sounds. Hanks, who could probably read help wanted ads and still win an Oscar has built enough goodwill  for us to follow him where ever he wants to take us, which for now is on an apocalyptic road movie.

Hanks plays Finch, a guy ,who thanks to his job, survived an apocalyptic event that has made being outside in the sun impossible. For some time he has lived in a factory with his dog and a robot he uses to help him retrieve items like food, for him and his dog Goodyear. The clock is ticking though for both himself and surviving at his current location, so Finch builds another robot, this one human size, who will take care of his dog when he is gone. So with a plan in hand, they all pile in a Winnebago, which is a perfect road trip vehicle, and head out west. Finch of course has figured a lot out, but with this new robot, who is named Jeff (Caleb Landry Jones), there is a pretty big learning curve, as while he might have plenty of knowledge, he has no street smarts whatsoever. Finch teaches him about life, but not without a lot of mistakes along the way, some of them, almost costing them their lives.

Written by Craig Luck and Ivor Powell, Finch charts a good course that will tug at a few of your emotional strings. Sure it has its monologues delivered  by Hanks that will cause some water in your eyes, but it is also filled with lots of light moments that will both make you smile and laugh. Most of the laughs come from a great deal of fish out of water moments in the early moments that almost over stay their welcome.  Besides Hanks knocking it out of the park as usual, the craftmanship and performance by both the puppeteers who operate Jeff, and Caleb Jones who voices him also really stand out. As the trip continues the story does get bogged down a little with what feels like too much exposition in the third act, but the course is ultimately righted to end up with a very satisfying trip.

When it comes to delivering a visual treat, Director Miguel Sapochnik pulls it off. From selling the dire place that the earth has become, to simply staying out of the way and letting Hanks do his thing. It allows the actor to play Finch how he needs to be played. Hanks does this type of role so well, that it is easy to just take it for granted, but we shouldn’t because even though he makes it look simple, doesn’t mean it is. Finch is a gentle picture that stays clear of the gloom and doom of the Mad Max series and instead goes for the heart more than it does anything else. It is real and intimate and you will be glad you came along for the ride.