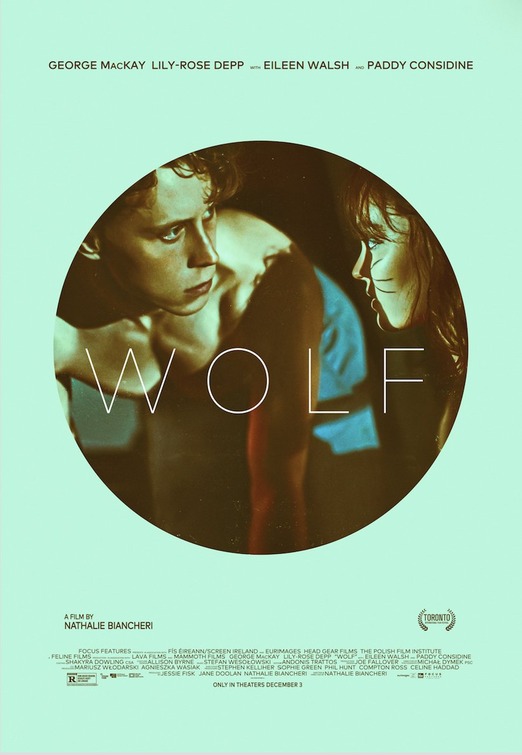 From the opening moments of Nathalie Biancheri’s sophomore film Wolf it is very clear that commitment is not something lacking in this film. In those moments we see Jacob (George MacKay) roaming in the woods on all fours and living his best life as the wolf he thinks he is. The problem is of course he is not a wolf, but a boy. So of course his parents seek some help and he ends up at a facility where there are others like him, well not exactly like him, as they believe they are other kinds of animals. This is called “species dysphoria”, an umbrella term used to describe this disorder in which individuals believe they were born the wrong species, needless to say this movie could get wild.

While it does have some wild moments, including a scene which for me might be some of the best minutes on film this year. More on that later though. Jacob shows up with what seems like a real desire to want to be normal as he talks to The Zookeeper (Paddy Considine) and declines to act like a wolf when he is told to. He is surrounded by others like Parrott (Lola Petticrew), German Shepherd (Fionn O’Shea), and a mysterious girl or wildcat (Lily-Rose Depp), who Jacob forms a connection with. Jacob tries to fight the urges to unleash the beast inside him, but Wildcat finds a way to help him become what he wants as the desire to be normal starts to fade. Biancheri who not only wrote the film, but also directs dives into where species dysphoria is something that can be cured or corrected. While the film could have been done very heavy-handed, Biancheri avoids making it too dark as she even throws in some humor, like the Parrot girl repeating what she hears. That though is not the films strongest point, as its two of its three leads, who are one hundred percent committed to the roles they play that keep you engaged. The one weak point is Depp, who makes no real impression as Wildcat and who is quite forgettable. While I appreciate the commitments that were made, there was a lot that did not connect with me as it feels like the story was just scratching the surface and left many things unexplored.

Most of the darkness comes from The Zookeeper, who’s way of treating these people is to make them try and be the animal they think they are and fail in doing so. Considine is wonderful and as I mentioned before he kills it in what I think is just five minutes of pure movie joy as he goes unhinged and mimics different animals at the patients who think they are said animals. This though is the highlight of a film that had very little for me. I can appreciate the effort and everything that went into the making of Wolf, but in the end it just didn’t have the bite I was looking for.