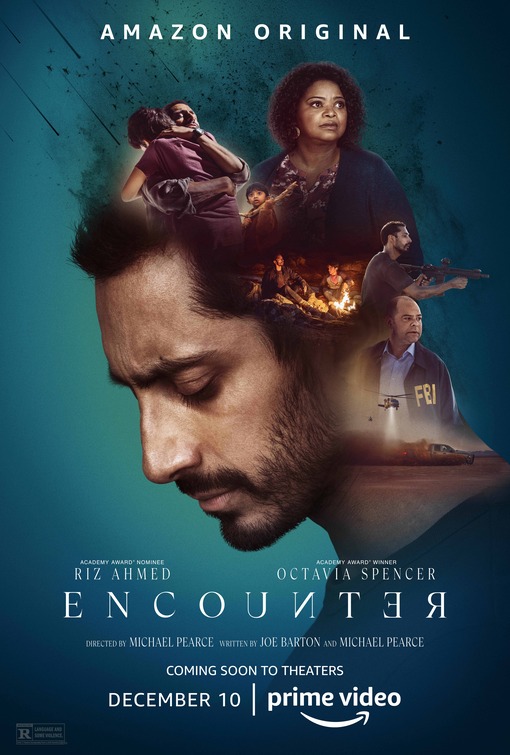 Riz Ahmed is one of those actors who simply embodies every role he takes on, and his body of work speaks for itself. He has that ability because of the energy he puts into his performance, an energy that has lead him to evolve into a true leading man. If there was any doubt to what he can do, that was laid to rest after an amazing performance in the excellent Sound of Metal, and now he is back with another Amazon original film. Ahmed plays Malik, a decorated U.S. Marine, who believes he has made a discovery the rest of the world is oblivious to.

Malik spends his days and nights moving from town to town trying to do what he can to stop what he sees happening. When he feels like he is facing an uphill battle, Malik decides the only thing he can do is protect his two boys, Jay (Lucian-River Chauhan) and Bobby (Aditya Geddada),  so he goes to get them. In the middle of the night. Billed as a road trip filled with no rules, Malik and the boys hit the road, trying to stay one step ahead from the alien menace that Malik believes is coming for them. While Malik says he sees things and uses bug spray to protect himself from the aliens he thinks are trying to take control of his mind, no one else sees anything he does, including his boys who start to question his claims. Written by Joe Barton and Michael Pearce, the later also directing, Encounter tackles PTSD through a science fiction lens. Feeling fresh and stylish, Pearce takes plenty of opportunities to ratchet up the paranoia as the film starts off hectic and pretty fast. When it does slow down it allows you to get a little comfortable before you start to rush to the next scene. It is at this point that the film starts to become a more of a family drama as the road trip is a lot of time for Dad and sons to spend together. While they head for an unknown destination, a phone call from Malik to his parole office named Hattie (Octavia Spencer) sets off a game of chase, as Hattie and the F.B.I. race to find Malik before anything bad happens.

Fueled by another strong performance by Ahmed and the surprising  ones by River Chauhan and Geddada , Encounter showcases a father’s dedication to his kids. Malik will do anything to protect his boys and the way Ahmed can switch between trained killer over to loving father is pretty fascinating. Even when his character loses control, you always feel like Ahmed is in complete control of his performance . With its plot taking a major turn at about the halfway point, it makes the first half of the film its strongest point, but if you stay onboard until the end, it becomes a rewarding experience. You may have come to this for the sci-fi elements, but is the complicated and touching  way the movie explores fatherhood that really brings it all together.