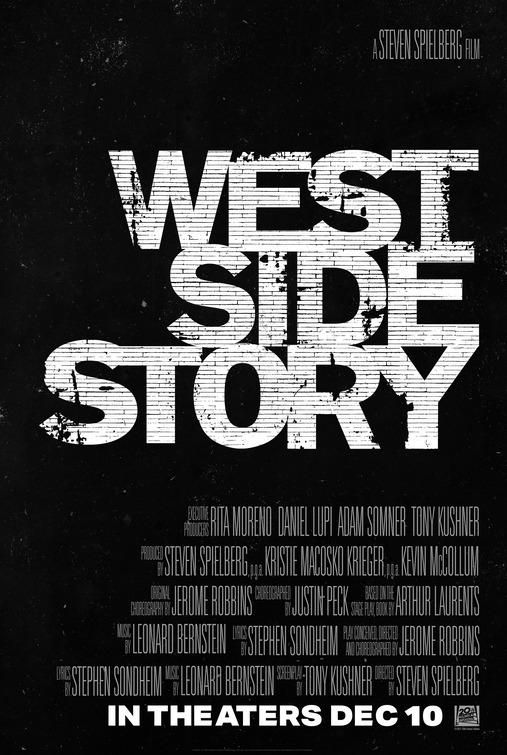 There have been many instances of big time directors taking swings at remaking a classic film. From successful ones like De Palma’s Scarface and the Coen Brothers take on True Grit. Then there are the not so successful films like Tim Burton’s Planet of the Apes or Rob Zombie’s Halloween. However very few directors take on a remake of a film that is usually in the top ten of the greatest films in their genre. If you look up best musicals of all time, West Side Story is almost always present and is usually at the top of the list.

Another thing you don’t see often are the words “remake” and “Spielberg” in the same sentence. In his now 50-year career he only has two “directed by” credits of films considered remakes: War of the Worlds and Always (still in my opinion one of his underrated best). So when I heard he was remaking West Side Story I was a bit skeptical. This solely based on his last decade of work, which have not been up to the standards of his films from the 80’s and 90’s. The key to this particular remake would hinge on his adherence to the original material while still making it relatable to modern audiences and somehow re-capturing the beauty and vibrancy of the Super Panavision 70 visuals of the 1961 classic.

The story of Maria (Rachel Zegler) and Tony (Ansel Elgort) itself is a re-telling of Romeo & Juliet, whereas a forbidden love is found from opposing sides of 1950’s street gangs The Sharks and The Jets. Both fighting for supremacy of a scrap of street corners that are being demolished and remade into a more upscale modern New York, which will then eventually dispose of both gangs all together. Something that they are reminded of constantly by Officer Krupke (Brian d’Arcy James) and Lt. Schrank (Corey Stoll). Having had enough the two heads of the gangs Riff (Mike Faist) and Bernardo (David Alvarez) decide on a winner-take-all rumble, that they agree on while attending a dance where Maria and Tony meet and fall in love.

Where this adaptation stumbles a bit, much like the original did in ’61 was its broad strokes in regard to race and class warfare. These are poor kids fighting in a poor neighborhood, it’s hard to center that kind of drama as well as a love story without making the background seem like, background noise. But fortunately like the original this is all about the music and dancing. And without a doubt Spielberg recognizes this and it is his primary focus. Along with Janusz Kamiński, his cinematographer since 1993’s Schindler’s List,  together they bring to life this grand musical and lean hard on the beauty of the classic music of Leonard Berstein, the lyrics of Stephen Sondheim and the brilliant choreography of Jerome Robbins. With modern dialogue by Tony Kushner and fantastic choreography by Justin Peck this version of West Side Story blasts off the screen. Even though Spielberg adds some grit and dirt to the pallet, it just further grounds the epic nature of this story set in this small corner of the world.

As far as the performances go, suprisingly the two leads (Elgort and newcomer Zegler) don’t light up the screen like Mike Faist, David Alvarez and Ariana DeBose who plays Anita do. They bring an energy and tragedy to the supporting roles that get a taste of in the original but not at this level. Not to be outdone is veteran and former Anita herself Rita Moreno as Valentina the now owner of Doc’s Drugstore. She has few moments, but make them all count including her one musical number which is something to behold and shows all this young performers what they should aspire to be. So like the ’61 version I love this version of West Side Story as well. At just about the same running time as the original you don’t feel it as it breezes by with every dance and musical number that are brimming with life, whether on an actual street or on a soundstage.

With such a big swing Spielberg takes here, on such a legendary piece of history, he proves that once again why he himself is also considered, a legend.