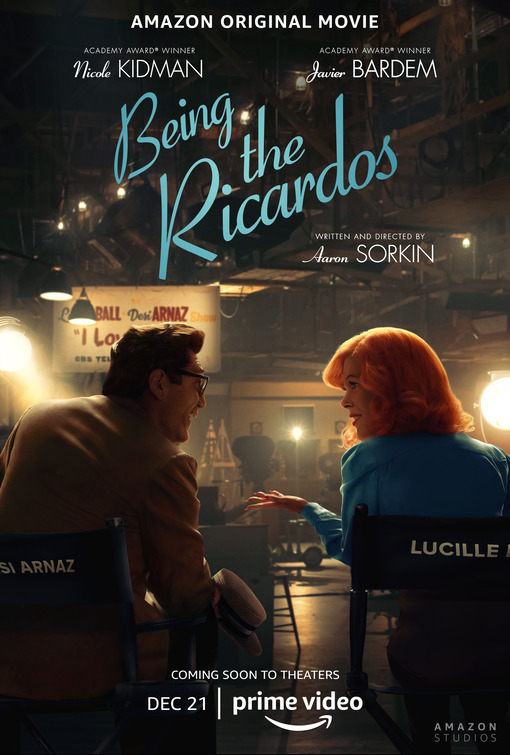 Telling a biopic about someone’s life can always be a tricky thing, because how do you tell their entire story in two hours?  Well the trend lately has been to explore an important chapter in that person’s life or in some case combine some stories into a particular amount of time to give you a window into their life. Being the Ricardos takes that approach as we witness one week in the life of Lucille Ball (Nicole Kidman) and Desi Arnaz (Javier Bardem) as they film an episode of I Love Lucy  during the second season as some important news hits that might change everything.

At this time, Lucille Ball was the biggest star on TV as her show was pulling in an audience of over 60 million people each week. It is at this height that a story breaks about Lucy being a communist, something you don’t want to be called in the early 1950’s . It is then that the men in suits start to ask if they should be worried, but Lucy and Desi assure them that they don’t need to worry as there is a honest reason for her being called that and that she had already been cleared. That though isn’t the only problem, as Lucy is also pregnant, something that at the time would prove difficult in the filming of each week’s episode. Written and directed by Aaron Sorkin, Being the Ricardos  is filled with Sorkin’s trademark zippy dialogue that I dream one day will be how everyone talks to each other. Until that day I get to see it every few years and for someone who made a lot of people disappointed with her casting, Kidman is just dynamite as Ball. If you ever were to doubt her abilities, something I don’t know why you would, this film just reminds us she can bend herself into any role. As if the film doesn’t have enough going on, Sorkin also throws in that time Desi was photographed sitting too close to another woman, something that is compounded by Desi’s nightly absences, or as some might say, added fuel to the fire. Kidman and Bardem are just fantastic playing the couple and while some might have a problem with Bardem, who is Spanish, playing a Cuban, other than his below average accent, plays Arnaz perfectly. “Intensity” is the word of the day and this film has it in abundance, especially the table read sequences, that just pop with it.

Being the Ricardos  does have its flaws, and most of them come from the films lack of heart, as its words are witty and have a rat-a-tat fluidity to them, still often lack feeling. Even though it is not enough to dull the performances and this cast is just too good to let things get in their way, especially Kidman. Who gives one of the finest performances of her career. This is a well-crafted movie and it all comes to a very satisfying end that any fan of Lucy would love.