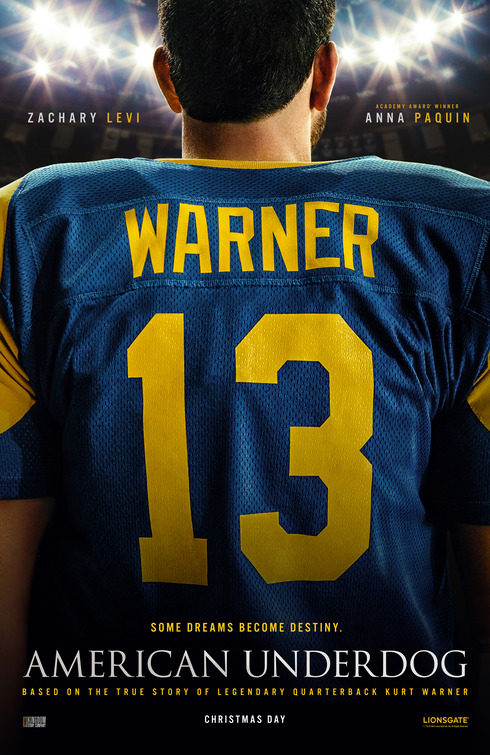 One of the most difficult things to navigate in today’s modern film landscape is the dreaded “spoilers”. With social media it is almost impossible to go a day without laying eyes on a pic or article title that gives away a films plot details. Another challenge is making a successful PG rated film. Now I’m talking about a PG live-action film. Not something that relies on CG robots, a talking baby, or LeBron James. The latest film by Andrew and Jon Erwin, American Underdog decided to take on these two challenges. First, their entire marketing campaign all the way down to the poster spoils the ending. Second, the PG issue is handled by bringing in some quality talent to perform a script that has no sex, violent shoot-outs, or harsh language. So the only question remaining is: Are you ready for some football!?

Kurt Warner (Zachary Levi) is a college superstar with his sights set on the NFL. He’s fast, focused and talented quarterback. It’s at this time in his life when he meets Brenda (Anna Paquin) a single mom who will not let anyone get too close. But as singular focused as Warner is on the field, he doesn’t have an ounce of quit in him off the field. He pesters Brenda in that cute, but kinda creepy way until he gets a date. Then shortly after he bonds with her blind son Zack (Hayden Zaller) Kurt and Brenda end up together. But when his chance with the NFL goes south, Kurt takes on a grocery clerk job in order to support the new people in his life. The hard times eventually lead him to Arena Football where he tries to make the most of the distance from those that he cares for and the stigma that comes with the AFL. As he proves himself on the field the NFL comes knocking once again, and he has a second chance to prove that he could be one of the best there ever was.

American Underdog leans heavy on the family aspect of Kurt Warner’s life, specifically he relationship with Brenda and her kids. His passion for football ends up being the background element here. Which is uncommon with a lot of sports biopics. It’s always family and the field for sure, but here family is the center point. Levi with his boyish charm, his putty-like facial expressions and imposing figure, he proves once again his leading man status is on the rise. And his screen time with Zaller who is actually blind is super sweet and heartfelt. Paquin doesn’t fare as well, as there are times when she looks a bit confused by what she should be expressing. Maybe that is by design, it just felt a little off. However when she rocks the monologues and turns on the water works she totally got me.

Another flaw is the timeframe of the film, which is all over the place. I couldn’t tell if something was taking place 3 days later or 3 years later. The brothers Erwin who have made their mark in films centered around faith like I Can Only Imagine, I still Believe, and Woodlawn stay firmly on that PG path, and while those films have their audiences, I’m not usually one of them. But with this cast and Warner’s inspiring story they produced something emotionally stirring and a film the whole family can enjoy.