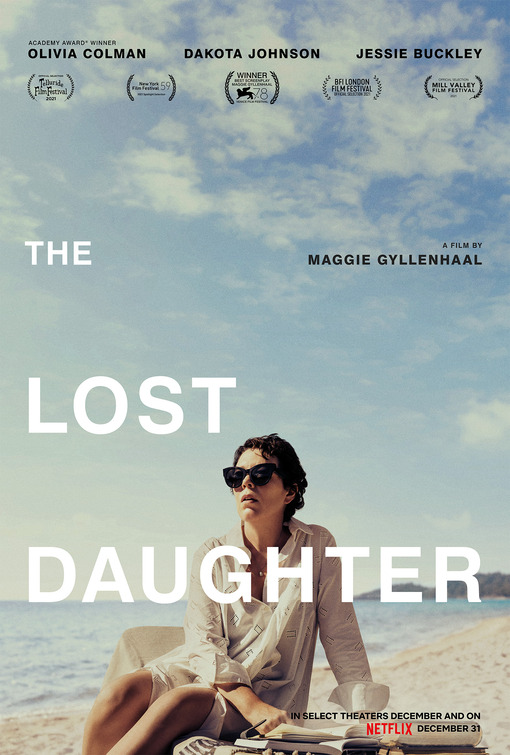 At this point, I don’t think there is anything that Olivia Coleman can’t do. Every time I see her name in a cast I am immediately interested.  With that said, you know I am going into something like The Lost Daughter and just plain expecting another Oscar nominated performance. Of course she did not disappoint as Coleman again proves she is at top of her profession in this in this film about a woman who is reminded of some past guilt and the way she responds to those memories. Written and directed by Maggie Gyllenhaal, from the novel by Elena Ferrante, The Lost Daughter is more than an acting showcase, it’s also a pretty damn good movie.

Leda ( Olivia Colman) is on holiday, or some might call it a “work” vacation as she is a professor working on her next book. Staying at a lovely little apartment with an ocean view, her days are filled with time at the beach and walking around this quiet little village she is staying in. You would think being at a beautiful locale would bring calm and serenity, but there is something off with Leda. And it really starts to show when a rich Greek family hits the island and you can tell right away Leda is not having it. While she sits there angerly at what is happening, her attention goes to a young woman with a toddler.

That woman is named Nina (Dakota Johnson) and she looks like she is having a difficult time with the whole mother thing. This brings back a flood of Leda’s own memories and her issues with being a mother, which Gyllenhaal tells though flashbacks, as young Leda is played by the amazing Jessie Buckley. We see Leda as a rising star in her field of study and having two young daughters is getting in the way of that. It is that past that haunts current Leda, as Nina reminds her of the spot she was in while being her age. The Last Daughter  is essentially a character study, while getting at the complications of what we view as motherhood. That being said it doesn’t always play nice and can ruffle some feathers along the way, even as it offers a sense of comfort while doing so. Being rich in character, it is enhanced by the choice of cast, led by of course Coleman, Johnson, and Buckley all delivering stellar performances as they are supported by great actors like Ed Harris and Peter Sarsgaard.

This is not a comfortable topic and Gyllenhaal really pulls it off by focusing on the women as they experience both despair and doubt about motherhood. An argument can be made that the flashbacks slow the film down a little, but they also provide a very powerful and more complete picture of Leda while filling in all the details on the woman she is today. Coleman displays the skills that she simply is one of the best working actors today and it shows that no one else could have played Leda but her. The Lost Daughter is not just one of the better movies you will see as this year ends, but also a great conversation starter that gives you a lot of material to wade through, and creates a powerful discussion you may or may not be ready to have.