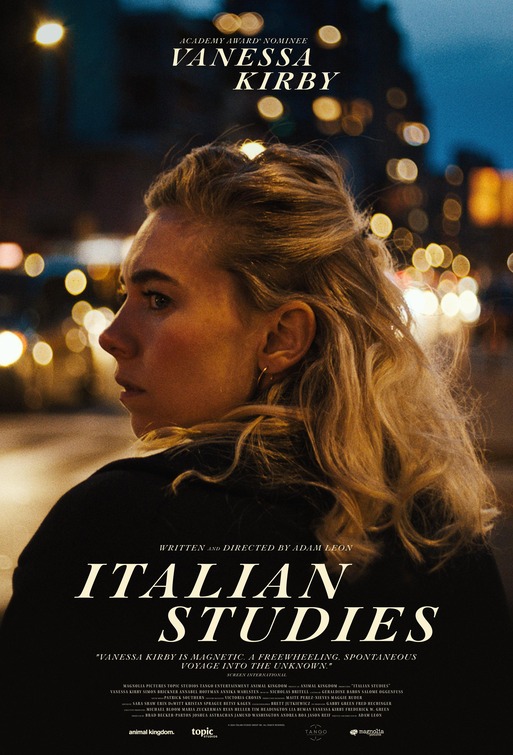 Have you ever had that moment when you walked into a place and you forgot what you came for? That is what happens in Adam Leon’s new film to Alina Reynolds (Vanessa Kirby), as she wanders around New York City trying to find her way home. This though isn’t a momentary lapse in memory, no instead Reynolds seems to forget who she is for days.  Leon’s script does a pretty good job at making you feel like his title character as it doesn’t take any time to explain what is going on, which often can at times make you feel just as lost as Alina.

The story starts off simple enough, as Alina goes to a store to get some hardware, that is at least what you think as she sorts though some wingnuts.  You know something is wrong when she wants out of the store and leaves her dog tied up and looking like she doesn’t know where she is at anymore. She starts to roam NYC and eventually comes across Simon (Simon Brickner), a goofy looking teenager, who somehow convinces Alina  to walk with him as he goes to get the weed he has stashed somewhere. This is of course what I would have loved the movie to had been, a gender reversal of Lost in Translation, with Simon acting as a tour guide for an older person, who seems to be a visitor from another city. That though is not what we get, and the amount that we do get, feels way too little. Instead Simon takes Alina to his friends, who while might look like a bunch of kids you would want to stay away from, turn out to be a pretty good group. Now that you are reminded not to judge a book by its cover, you get to listen to the kids tell stories about their lives and their dreams. Alina we find out is an author and you start to wonder if her memory loss is something medical, or maybe even a ruse to get inspiration for a new book. Leon’s film feels rather experimental, as Kirby and the young actors improvise off what feels like a thin outline. Of course Kirby can make anything look easy, as she doesn’t really need words to look captivating, and as she roams around the city, you hope mostly she remembers who she is, so she can get her dog back.

Italian Studies really never gets to a satisfying narrative, as when it ends you wish you had seen something different than what is presented. While the story is interesting enough, the chemistry that Kirby and newcomer Brickner share makes you which the film had just been the two of them. Brickner really is great as he charms his way into you loving him as he enlivens the film every time he shows up. Not having enough of Kirby and Brickner together holds the film back as everyone else in it is a blur, as none of them can hold a candle to those two. At 81 minutes though, the film flies by and while you may get lost often, the trip as a whole is interesting enough to make you not totally forget what you just saw.