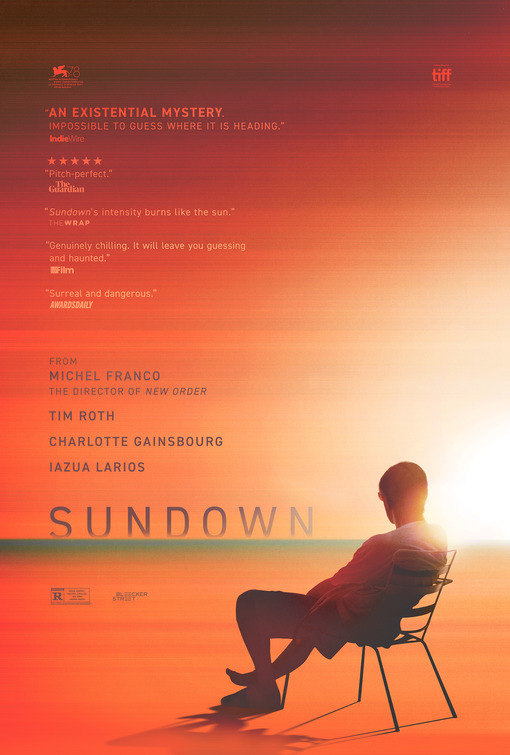 When it comes to levels of cool, you have ice cold and then you have Tim Roth cool. It’s an easy decision when you see a movie with Roth’s name in it, you just want to watch it, no questions asked. In Michel Franco’s new film Sundown Roth plays a man named Neil, someone who has just gone on permanent vacation. Things didn’t start that way though, it began with Neil and his sister Alice (Charlotte Gainsbourgh) along with her two adult children as they soak up some sun at a luxury resort in Acapulco.

Things are going great, lots of laying in the sun and just overall living their best life. Things take a turn though when Alice gets a phone call that her mother has died and their holiday has to be cut short, but there is a problem when they arrive at the airport to get back home. It seems Neil has misplaced his passport and assures Alice and the kids he will be on the next flight, but that is not true at all. Instead Neil gets in a cab and heads to a different hotel, one not nearly as nice, and just spends every day sitting in a chair on the beach. Neil doesn’t say many words, which is fine since he is English and doesn’t speak a word of Spanish. Slowly he attracts different characters and while on the surface they seem fine, you keep waiting for the point where they start to take advantage of Neil. Roth who usually plays his roles with a certain flair is rather subdued in this performance, but even with little said, you can tell there is something off about Neil from the beginning.  While he sits on this beach, ignoring his family that needs him back home, he finds time to meet Bernice (Iazua Larios), who he starts an affair with, all while having no cares what is happening around him. Eventually Alice finds Neil and Neil wants to give up his share of their families vast fortune and just live his days on the beach with no care in the world. It is only after another incident that we find out more why Neil is this way and which gives the film’s title a whole new meaning as well.

Franco’s last film New Order leaves a mark on you, really takes it easy with this one. For Sundown, Franco delivers a snapshot of that feeling at arrival in life just before the sun sets for the last time. There are no spectacular twist, just a story about a guy who knows where he is in life and his acceptance of that. While watching Roth stroll around can often be mundane, there is a sort of comfort to what you are seeing as well, but because of that Sundown often feels like a short film stretched a little too long. What it does emote is very sublime and it will end up giving you a lot more to chew on as you think about your own sundown.

A Taste of Hunger