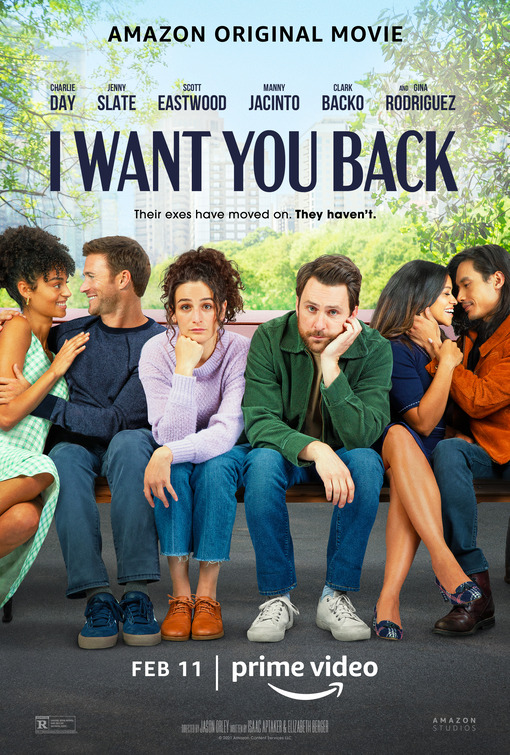 As we approach another Valentine’s Day you can feel the love in the air and with it the release of a new romantic comedy to remind you of what you have or maybe, don’t have this time of year. Finding a good romantic comedy though can be like going on dates, for every good one you have, you are bound to have twelve that are very forgettable. Enter I Want You Back the story of lost love and the lengths some will go to keep it, which in this case might be a little too much.

Somewhere in a beautiful city in the United States two couples are living their lives as they do every day, but things are about to change for them both. Peter (Charlie Day) and Anne (Gina Rodriguez) have been together six years, but Anne is ready to move on, as she feels Charlie is holding her back from being the “real” her. Meanwhile Emma (Jenny Slate) and Noah (Scott Eastwood) have not been together as long, but Noah wants to move on as well, yeah love sucks for Emma and Peter. Luckily for them, as they are swimming in their sorrows, a chance meeting in a stairwell gives them each an ear to help them overcome their heartbreaks. What starts off as just talking about things soon turns into them working out a plan that will make both of their ex-loves see the error of their ways and come running back to them.

Written by Isaac Aptaker and Elizabeth Berger, I Want You Back is really steered by Day and Slate, who bounce off each other in all the best of ways. Utilizing their comedic chops, they do a good job of bringing the laughs, there is also some awkwardness in the form of Eastwood and Rodriguez, who aren’t really known for comedy and with good reason. Even with that weight around it, the first half of the film really works, as Peter and Emma execute their plan you see where it will probably end up, but it’s worth the ride. A lot of that fun involves putting its characters in funny adult situations and even using Little Shop of Horrors which also works surprisingly well. Where the film starts to fall apart is in its third act, which I think the 1 hour and 51 minute run time contributes to, as things feel like they are going too far.

While you know a happy ending is almost always guaranteed with a romantic comedy, I Want You Back does take a few winding twist and turns getting to the ending you expect. Doing a good job of not being too wacky, and adding just the right amount of heart also helps, but Day and Slate are so charming that you can almost tolerate the noticeable decline as the film goes along. There is a 75% enjoyable movie here and only sputters at the end because it feels forced and drawn out, lucky for us the comedic duo keep it just funny enough.