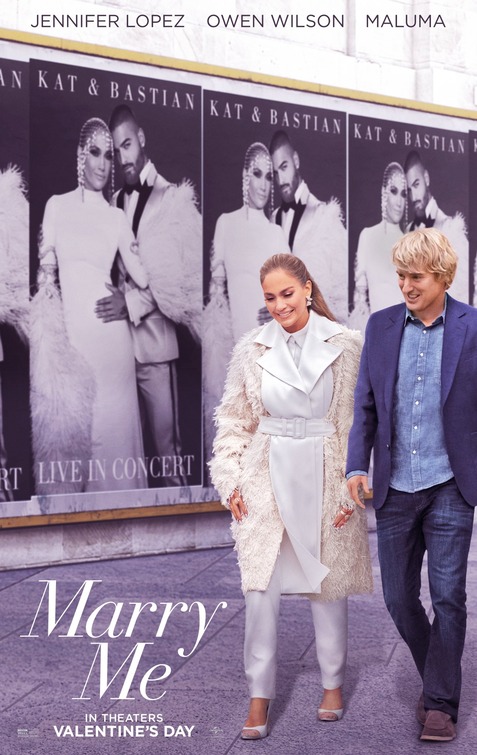 If you have ever been to a concert before, then you have seen that fan holding up a sign that says “marry me” to their favorite artist. For me I like to think of that person as their biggest fan, who is just taking their shot, because you never know what can happen. I don’t know where Bobby Crosby ( Marry Me Vol #1 ) got the idea for his story, but I am going to just say if he was one of those fans, he made up his own response to that sign. Now Charlie Gilbert ( Owen Wilson) is that guy and when he finds himself at a Kat Valdez ( Jennifer Lopez) concert with that sign in his hand, the impossible happens.

Charlie wasn’t even supposed to be there, but his friend Parker (Sarah Silverman) has a break up and all of a sudden has two tickets to the hottest event out there. She offers to take Charlie and his daughter Lou (Chloe Coleman) to the show. This though is no ordinary show, as Kat is supposed to marry Bastian (Maluma), but right before that is supposed to happen, pictures surface of Bastian with Kat’s assistant. Talk about bad timing. So Kat does what anyone would do in that moment, and she asks a random guy holding a sign asking her to marry him, to actually marry her. Try saying that three times fast.

Harper Dill, John Rogers, and Tami Sagher adapt Crosby’s graphic novel here, but what might have seemed to have worked on the page, comes off as formulaic in movie form. This is just one of those movies where girl meets a boy, and then falls in love with boy.  But might still want her ex, only to realize she loves the boy-kind of love story. There is no doubt that these two are not going to end up together, so even when the characters have their tried act doubts, you know they will get their happy ending. After the wedding on stage, Kat decides to roll with it for a little bit, because she might come off looking crazy if she just ends up pretending it never happened. So cue the awkwardness of getting to know someone, but with a thousand cameras recording your every movement to go along with that. Sure there is some cute moments, like Kat having to try and figure out to get in her house without her team around her, or Charlie giving up his flip phone in 2022, but hey that is what love is for.

There is not much to enjoy here, but maybe a few catchy songs that Jennifer Lopez sings, but when your soundtrack is better than the movie, that is never a good sign. There is no conflict in this story, and while this would probably never happen in real life, because what pop star would end up with a middle school math teacher? Maybe I am wrong and this is where we are at in the year 2022, but I think we deserve better than a the cookie cutter Rom-Com that is Marry Me.

Ghosts of the Ozarks

I Want You Back