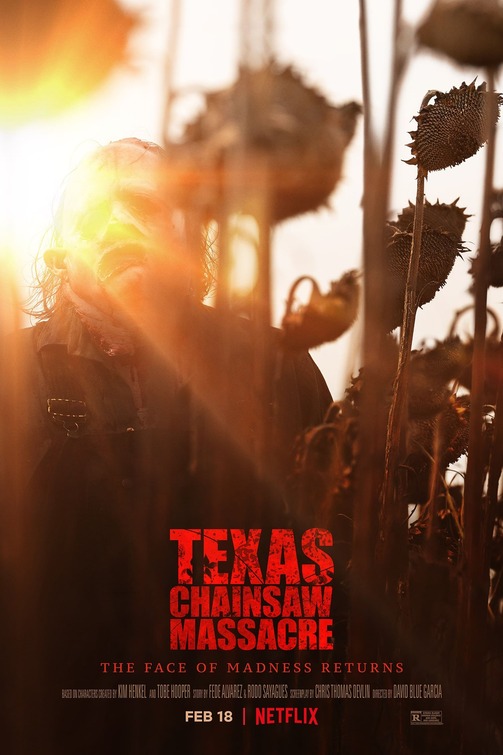 Years before Michael Myers tormented a babysitter and her friends, or Jason made going to camp on a Friday terrifying, Leatherface was the reason for teenager’s nightmares (Freddy also came later). Now some forty nine years and eight movies later, in a spiritual sequel to the original 1974 film, Leatherface is back to terrorize a new group of friends. Coming from Austin, Dante (Jacob Latimore) and Melody (Sarah Yarkin) are heading to the small town of Harlow, Texas with a money making plan for the now deserted town. While they, along with Melody’s sister Lila (Elsie Fisher) and Dante’s girlfriend Ruth (Nell Hudson), might have good intentions, a wrench, or more accurately a chainsaw is about to be thrown into their plans.

As they enter the town, these city dwellers are greeted by the Sheriff (William Hope) who just asks them to respect the town. Harlow is empty except for a garage that Richter (Moe Dumford) is still in. Richter is a good ol’ boy, but really is no threat, that is until Dante and Melody have a run in with a woman still living in the orphanage with her rather large boy. Arguments are had and Dante decides the best thing to do is have the police remove the older lady, but during the removal the woman has a heart attack. The Sherriff and his deputy take the woman to the hospital, as her boy and Ruth go with them, but they will never make it to the hospital, and soon the man known as Leatherface (Mark Burnham) heads back into town to cause some more havoc. Written by Chris Thomas Devlin, from a story by Fede Alvarez and Rodo Sayagues, this version of the story has a foot in the past and tries to give some closure to the first film. Of course, if you don’t know, there was one survivor in that first film, and it seems she has been waiting for her chance to get revenge (that sounds familiar). The problem is that Sally, played by Olwen Fouéré doesn’t have the connection to Leatherface as say Laurie Strode does with Michael Myers, so even though she looks like a bad ass, you don’t really care. And unfortunately she’s not the only character you don’t care about, as I found myself rooting for Leatherface more than I should have. By the time the big final fight comes around, I was dealing with mixed feelings, as I loved seeing chainsaw wielder back in action, I just think he deserved a better movie to display his unique skills in.

They can make another ten of these movies and I am going to be there for each one, because no matter how many times they miss, there is always a good chance for a classic to be made. This sadly isn’t that time, as this story has a lot of misses, mainly you got to care about the people who are being hunted, and that is not happening here. It ends up being a poor attempt at a slasher movie, it does however get the ending right and at least gets me excited about what can come next.

I Want You Back