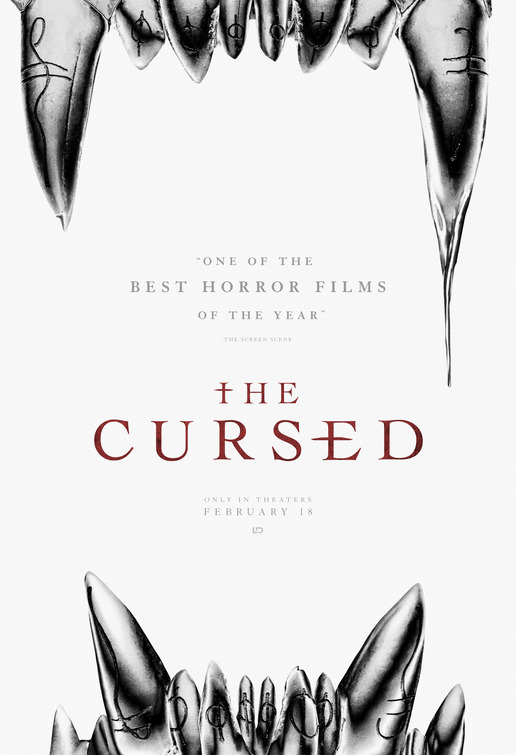 With a title like The Cursed it’s pretty easy to guess what is going on here with Sean Ellis’s new film. The culprit behind this story goes against everything that Gordon Gekko stands for, greed is not good and sometimes there are consequences to those who partake in it. Set in rural 19th century France a group of elders in a village have a problem with some gypsies who have come onto their land, laying claim to it. This is not good for business in the minds of the elders and they decide that something must be done, but their actions are about to unleash a menace upon their town.

The Laurent family seems to have the most juice in the town, so when Seamus Laurent (Alistair Petrie) decides that the gypsies must be made an example of, it is done. Seamus lives with his wife Isabelle (Kelly Railly), and their daughter Charlotte (Amelia Crouch) as well as their son Edward (Max Mackintosh) on a rather large estate. After the gypsies are removed, Edward starts having the same nightmare every night, but it is not just him having it. This leads a group of kids to go to an area that has been forbidden, and what they discover will lead to an unthinkable terror. Luckily for all of the town, a pathologist named John McBride (Boyd Holbrook) has arrived, following something that killed his wife and child. McBride seems to know quite a bit about what is going on and he also might know a way to stop it. Ellis, whose last movie was the very good World War II movie Anthropoid doesn’t try and reinvent the wheel here and delivers a classic monster movie. The Cursed uses the French countryside to its full advantage, with its gloomy, fog-shrouded woods, and the candlelit hallways in the manor to build an uneasiness as you feel something is always lurking in the darkness. This is not one of those monster movies where things work quicky, as Ellis wants you to be patient, as he keeps the identity of the beast that stalks the village well into the second act. By the time we see what is stalking the village we know it is not going to be easy to kill, but McBride has a plan and all it might only take a silver bullet to end their problems.

This is just not a run-of-the-mill creature feature, no, Ellis’s story is also about guilt and betrayal and he uses those themes to deliver an interesting take on the iconic werewolf mythos. There is no full moon that unleashes this beast, as the human factor is gone once this curse grabs a hold of you as it consumes the body and soul. Bookended by a pair of events that take place 35 years apart, it uses this excellent framing device to the narrative as well as a peek into the film’s climax. Elis has delivered a moody, yet very effective supernatural story.  It’s impressive in its world-building and delivers some fresh ideas, which are a welcomed addition to the classic creature features of old.