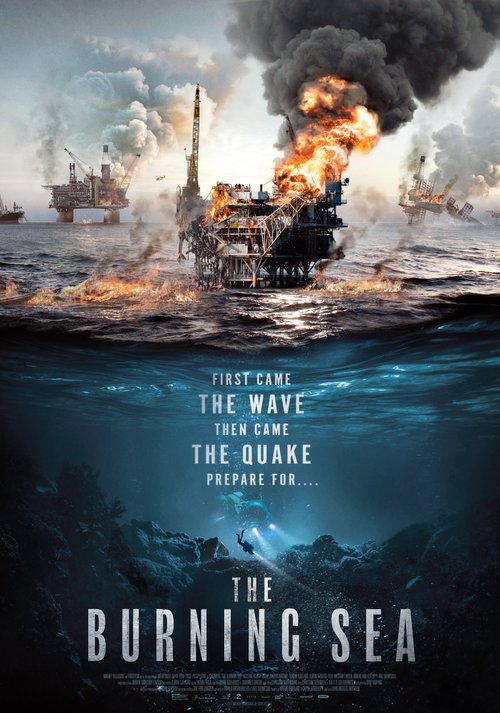 Disaster movies have always had a special place in my heart. I mean it’s not like I love to see human suffering on a large scale or things being destroyed, although that can be cool. For me, in the end I know it’s just a movie meant to inspire thrills. In the States our current disaster movie champion is  Roland Emmerich with films like The Day After Tomorrow, 2012  and most recently, Moonfall. Though one could argue that that last film was a different kind of disaster. Across the pond however, writer Harald Rosenløw-Eeg has his own disaster trilogy going on and his latest The Burning Sea shows once again how to make a proper film about peril.

Sofia (Kristine Kujath Thorp) and Arthur ( Rolf Kristian Larsen) are co-workers that build and operate robot subs that can get into tight places. Sofia is also in a relationship with Stian (Henrik Bjelland) and they are a happy couple enjoying life. After an accident on an offshore oil rig, Sofia and Arthur are called into action so that their sub can search for any survivors, but what they discover is that the situation may be worse than they thought. You see after an explosion, the sub camera caught something on the sea floor that would cause more instances like the one that just occurred. Sofia warns the oil company and they start evacuating the rigs, as well as shutting off the oil wells in order to prevent a disaster. Stian works on one of those rigs and when there is a problem during the evacuation, he volunteers to fix a problem, something that he may regret doing.

Rosenløw-Eeg has made his mark with disaster movies with a small town in The Wave and the big city in The Quake, and this time along with fellow writer Lars Gudmestad he takes on the ocean. As with the two previous films, the disaster is the inciting incident, but it’s the people and how they react that is the focus. Destruction is just the backdrop. Like its Hollywood cousins, the special effects are grandiose and remind you something enormous is happening. There are no throw away characters here, instead they focus on a small group and how this disaster affects them. This is a story about when we as humans push the earth too far, but it is also about how we can endure and what we are willing to do in order to survive.

The Burring Sea will satisfy any lover of this genre as you will feel both awe and sympathy for what you are seeing. Director John Andreas Anderson delivers the goods, while reminding us what makes a film like this so enjoyable. Not just a visual treat, the film really comes together because of Thorp’s performance and her characters “never say die” attitude. Maybe because this time it’s not Halle Berry and that guy from Game of Thones taking danger head on, that it’s more believable here, either way the performances are solid. If you haven’t seen The Quake or The Wave you should correct that cinema blind spot, but they are not required viewing for this one. The Burning Sea reminds us that a good disaster film is not simply a relic of the past, but something that is alive and thriving. Just not in America.