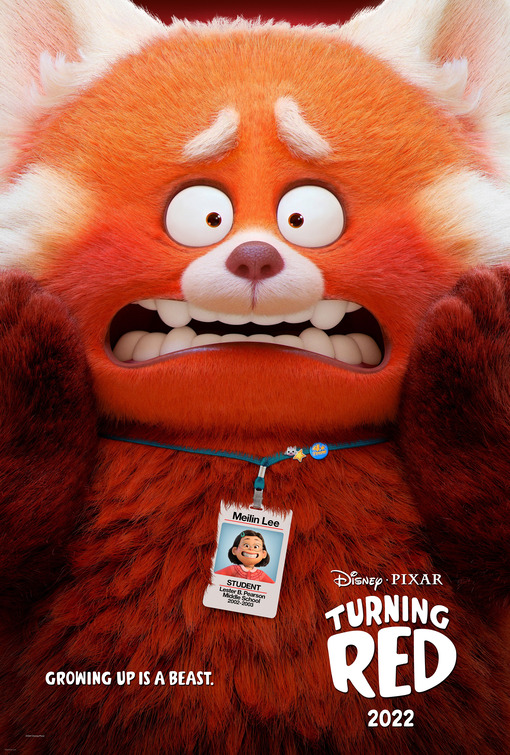 Let’s face it, puberty is hard enough to go through as we navigate new feelings and desires without any other unexpected side effects. This also begins the time when parent and child start speaking two different languages and fail to understand each other’s wants or needs. Movies have always have tried to tell this story with different degrees of success. With Eighth Grade having recently given us an all too real look into that change. If that was too bleak to watch with your changing child, Pixar and Disney have come along to give you Turning Red, a much easier watch, but maybe just as telling.

Meillin Lee ( Rosalie Chiang) is the child everyone wants, respectful, good at school, and does everything her overprotective mother Ming ( Sandra Oh) wants her to do. Meillin, though has her bouts with disobedience as she is a thirteen year old girl who had gone gaga over a boy band called 4*Town. Meillin has a good group of friends, which help her get over the bad times at school, which are mostly caused by Tyler (Tristan Allerick Chen) and his bullying. Meillin is about to discover some new feelings and with them an old family trait that affects the women in her family. You see when Meillin gets too excited she turns into a giant red panda and not getting excited about anything can be a difficult chore for any teenager. Not knowing what to do, her mother explains the story behind what is happening to her and tells her there is a way to keep the panda in check. Writen by Julia Cho and Domee Shi, the latter also directing, Turning Red tells a wonderful, fresh and edgy take on womanhood. This is a great watch for families, that not only is entertaining, but also can act as a translator for both children and parents alike.

It was a joy watching Turning Red. When I wasn’t smiling and laughing, I was bobbing my head to a soundtrack that would be hard not to enjoy. Domee Shi is the real deal, if you couldn’t already tell from her short Bao she did in 2018. She breaks new ground in design and delivers a familiar metaphor as it takes a beautiful spiritual journey. Sandra Oh is wonderful as Ming, but the real find is Rosalie Chiang who is just as splendid as Meilin and is a star in the making. While it has the great Pixar look, what is best is how openly puberty is discussed and how complex a mother/daughter relationship can be. Even with all the deep stuff Turning Red is a film that you and the family can learn from, and will ultimately love.