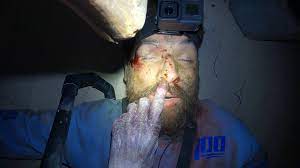 I don’t know if you would say I missed out, or call it lucky but I am of an age where posting everything in my life has no appeal. I don’t care about “likes” and the only “comments” I care about might be about my attire. In other words, Deadstream is right up my ally. Shawn Ruddy (Joseph Winter) is a stranger to me, as this man just cares about “likes” and will do pretty much anything to get them. After one of his adventures goes bad he is forced to step back, but he has quite a show in store for his return.

Shawn decides to stay the night in an actual haunted house. He goes to some extremes to make sure he stays put, like removing spark plugs from his car and putting a pad lock on the door and throwing away the key, all to make sure he has no exit. While he is making sure his fear doesn’t win out, he has come prepared and as he tours each part of the house, giving each room’s history, he places cameras all over, in hopes of catching something for his audience. Things do not go as planned and when Shawn starts hearing noises he does what anyone would do, run and hide in a closet. When it looks like something is going to finally get to him, it turns out to be a girl name Chrissy (Melanie Stone) who says she is Shawn’s biggest fan. Together they start to investigate some of the things they hear, but this house has a whole lot of surprises in store for them before the night is through.

Written and directed by Vanessa Winter and Joseph Winter, Deadstream is Evil Dead meets Paranormal Activity, in the best way possible. There is some serious love for the genre displayed by the Winter’s, and has some of the best practical creature effects I have seen in a while. It is those effects and genuine scares that show that everyone involved did whatever it took to deliver what they knew fans of horror would love to see. While it might not break the mold of your typical found footage film, it still feels fresh and the end result is highly entertaining.

I really enjoyed Deadstream, which not only made me laugh, but got me a few times when I didn’t see it coming. Of course it helps that Winter plays Shawn so unlikable that anything that does happen to him you see at it as, he had it coming. With their do-it-yourself approach, the filmmakers took some big swings with their small budget and because of their dedication, they all pay off.  Deadstream is a scary good time and will be a worthy addition to the found footage sub-genre.