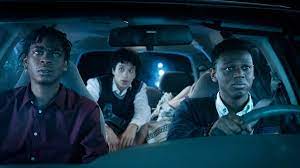 We all had the moment when we were younger that was supposed to be epic. You and your friends had the best of plans laid out and something or maybe someone got in the way and changed them. For Sean (RJ Cyler) and Kunle (Donald Elise Watkins) that night is upon them, as they prepare to be the first black men to complete the “Legendary Tour”, a tour of all the frat houses, and get their picture on a wall. With the “one wild night” premise set up, you know good times are going to be had, but a stranger is about to change all of that.

Sean and Kunle are best friends, but they are on different paths in life. Sean is living for the now and wants more than anything to complete the tour. Kunle on the other hand just received news that he is getting into Princeton and while he is down for the tour, he is worried about his thesis more than anything. As the evening is about to begin, Sean and Kunle stop by their place to change and discover a girl they don’t know, passed out on their living room floor. They grab their other roommate Carlos (Sebastian Chacon) to shed some light on the situation, which thanks to his lack of knowing what is going on puts them in a spot. You see this strange girl is white, and while Kunle wants to call for help, Sean tells him that it will not look good that three men of color have a white girl passed out on their floor. Kunle, who was raised in a home where his parents were both doctors, doesn’t believe any bad will come if they call for help, as they did nothing wrong. Ultimately Sean wins out, but they decide they are going to take her back to where they think she is from. The plan sounds good, but things escalate pretty quickly and as the boys are trying to get this girl the help she needs, her sister is also looking for her, which only adds to the confusion of the night. Written by KD Davila and directed by Carey Williams, Emergency is a feature length retelling of a short that the two did in 2018. While it is a comedy at its core, it also has some deep emotional and dark moments. By the time we get to the end, you come to a different understanding of the night’s events.

The script skillfully combines relevant social commentary with comedy all while providing a captivating view of a complicated situation. Cyler and Watkins are excellent together and seem to provide a great balance with what they bring through their performances. As the night goes on and the tension level never lets up, it allows the execution of the climax to have a significant effect on you as a mere viewer. Emergency addresses the fear of being a black man and the struggles that help form both decisions and indecisions in order to hold a mirror up and ask, “what would you do?”.

Marcel the Shell with Shoes On -SXSW Review