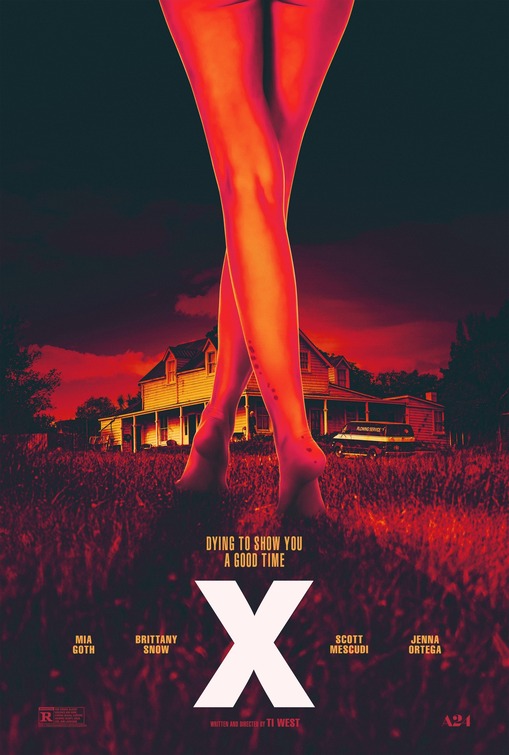 Everyone dreams of doing something great, but achieving it can turn out to be totally different, Ti West busted on the scene some ten years ago with films like The Innkeepers and The Sacrament and made a name for himself in the horror genre. While most of his work has been on the small screen lately, he is back and in a big way with his latest feature X. Set in a small Texas town in 1979, X is an ode to the cheap and dirty pictures of the time and boy does it deliver.

Tucked away in an industrial park in Houston is an burlesque club, whose occupants have grand plans for the new home video format that just came out. Led by Wayne (Martin Henderson) and his star Maxine (Mia Goth), a group of young people hit the road to make a movie that Wayne believes is about to make them rich. Coming along for the ride is Bobby-Lynne (Brittany Snow) and her beau Jackson (Kid Cudi), as well as RJ ( Owen Campbell), who is going to film everything and Lorraine (Jenna Ortega), is his sound person and girlfriend. Wayne has found them a boarding house where an older couple lives and for $430 a night will give them the perfect place to make their film. Things get off to a great start and while the older couple seems a little rough around the edges, they seem quite harmless. The wife comes off as a little lonely and when her push for attention gets a push back, she doesn’t take it too well.

Written and directed by West, is a film that starts in one direction, but half way through takes another route. While the first half seems like plays like a party, there is a different kind of party instore for the second half. West seems to effortlessly build and craft tension, almost savoring the buildup as the first kill takes place well into the film. He does all of this well, setting up a two possible final girls, and an ending you surely won’t be expecting.

X  doesn’t just bring some great gore, but also has touches of sneaky and cheeky humor. The trio of Ortega, Snow, and Goth really shine and deliver some rather delicious dialogue, and I only wish we got more of them three together. West though has really given use some new blood in this genre and with a secret prequel in the can, already and a planned sequel, this is only the entry into this world. West might be taking us into the future of the genre, but he hasn’t forgotten the past as he pays homage to the films that got us here.  X’s kills are brutal and epic and everything has the feel and the look of a 70’s film and with creeping sense that never seems to go away, at least until the final blow. If you are a fan of slashers and excellent filmmaking,  X will surely hit the right spot.