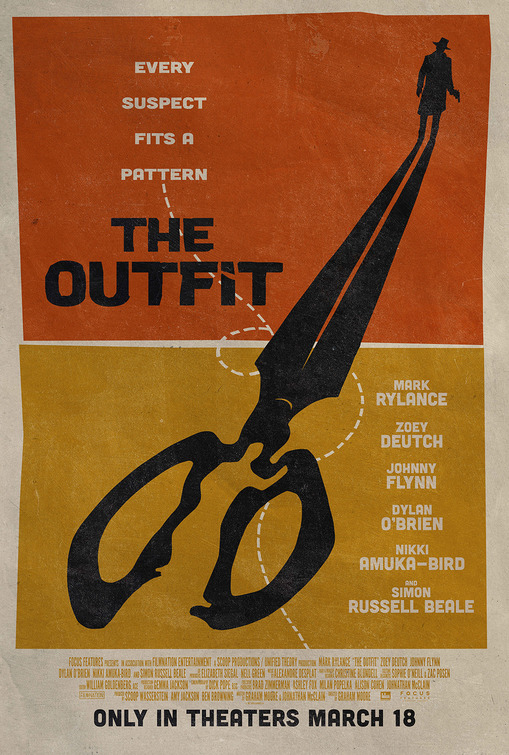 Eloquence is a word that doesn’t get used often enough, but I have always pictured the art of being a tailor as one of those jobs where one would have to be, eloquent. Of course I do not know any tailors, so this is complete assumption on my part, but I would hope that I am right. Leonard ( Mark Rylance) is exactly what I would picture a tailor to be, but Leonard is not a tailor, something anyone with a needle and some thread could be  according to him. No, Leonard is a “cutter” and that man can cut some serious fabric, but this  is a story where that talent will only help him so much.

Leonard owns a shop somewhere in Chicago and he is a man who does his job and keeps to himself. In his shop it is just him and his secretary Mable (Zoey Deutch), who dreams of traveling the world one day. Together they cause no trouble, but while Leonard works on different suits, men is suits and shoulder holsters with guns come to the shop to drop envelopes in a box is the back. Leonard pays no mind and ignores the coming and goings, that is until he can’t no more. Things get a little more complicated when Leonard discovers that Mable is going around with Richie (Dylan O’Brien), a local crime boss’s son. To make matters worse some of those envelopes that are dropped off are from a group known as “The Outfit” the contents of which could cause a huge impact on the organization. It turns out, Richie’s crew isn’t the only one after it, and he and Francis ( Johnny Flynn) get ambushed, so they make their way back to the shop. This is the point where the loose string on the fabric of everyone’s reality in that shop starts to come undone.

Written by Johnathan McClain and Graham Moore, the latter also directing, The Outfit presents a good ol’ fashion thriller that everyone and everything might not be what they or it seems. The Outfit  traps you in its web early as the film opens up with Rylance’s poetic words about his craft as he carries out the precision of an artist in his environment. This is very captivating as you can appreciate the skill of his profession and his steady hand. Leonard, or English as he is often called, uses his charm to wrap his customers, as well as us the audience, around his finger as Moore and McClain’s script shines.

The writing of The Outfit is not the only thing that is so precise, it also has outstanding camera work as well as solid editing. The filmmakers make great use of lighting and the confining space of the shop in order to keep everything nice and taut. Rylance is outstanding, but he is also joined by an ensemble that feels perfectly instep with him. It is also refreshing to see a film that finds a way to tell a compelling story in under two hours, unlike most films today that overstay their welcome. This movie is so well crafted that having it set in a tailor’s shop feels a little too perfect as this is one movie that is indeed a cut above the rest.