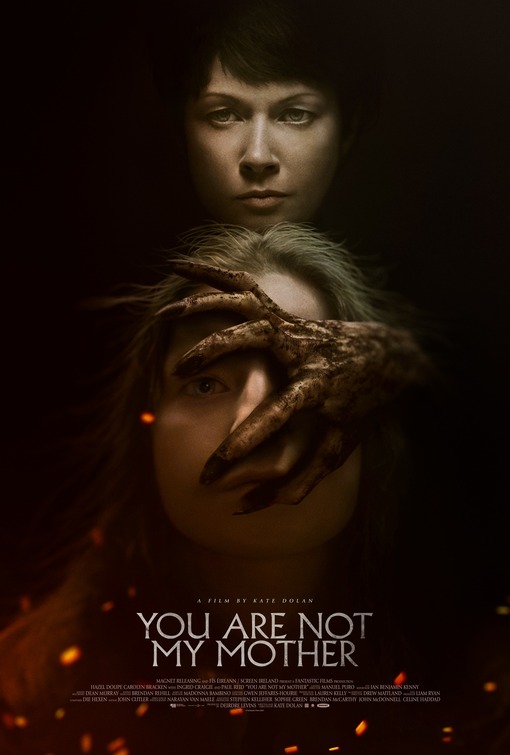 From its opening shot, You Are Not My Mother sets the mood and lets you know that you might get a little uncomfortable. Under the glow of a street lamp sits a buggy that contains a baby sitting on an empty road. While that is concerning enough it is not as concerning as what comes next as a woman appears and wheels the buggy away into a forest, where she pulls out a book and sets a fire as the camera pulls away and us not knowing where that baby is in reference to the flames. With this potent, but simple prologue Writer/director Kate Dolan lets us know she is not afraid to tackle dark material.

Some 15 years later we find Char (Hazel Doupe) waking up late for school. Since she has missed her bus she asks her grandmother Rita (Ingrid Craigie , the woman who performed the spell all those years earlier, and her daughter Angela (Carolyn Bracken), who is also Char’s mother. The story starts a few days before Halloween and you can tell that Char lives in an environment where mental illness controls much of their lives. Char is also gifted when it comes to school and has been moved up a grade which has left her with no friends and plenty of bullies who want to make her life difficult. After a day at school Char finds her mother’s car abandoned in a field and her mother nowhere in sight. A few days later she returns, but something is different about her. Angela has been pretty absent as a mother lately and Rita has physical limitations to how much she can help, although she does provide some help in the form of low key protection spells. Soon she is going to need that help as things are about to really change with her mother.

Dolan weaves a pretty intricate story in a tight 90 minutes while still letting the narrative establish a rhythm and tension. With its feet firmly planted in the horror world, You Are Not My Mother  is also entirely its own thing, as the background is steeped in folklore of Ireland. By the time you get to the end you know Dolan has chosen not to romanticize what this story is about, but instead delivers something deeply rooted in traditions.

You Are Not My Mother  is an excellent debut for Dolan as she delivers something that is full of rich themes and eerie context. Also helping is the superb performances, especially by the three woman who make up this family, but also not limited to them. This film is both creepy and heartbreaking, but it never feels hopeless as even Char is able to find a friend through all of this. You Are Not My Mother  has some familiarities to it, but it is also a fresh and distinctive new voice in the world of horror and it give us something that makes the world in a little stranger, but also much bigger than we ever thought.