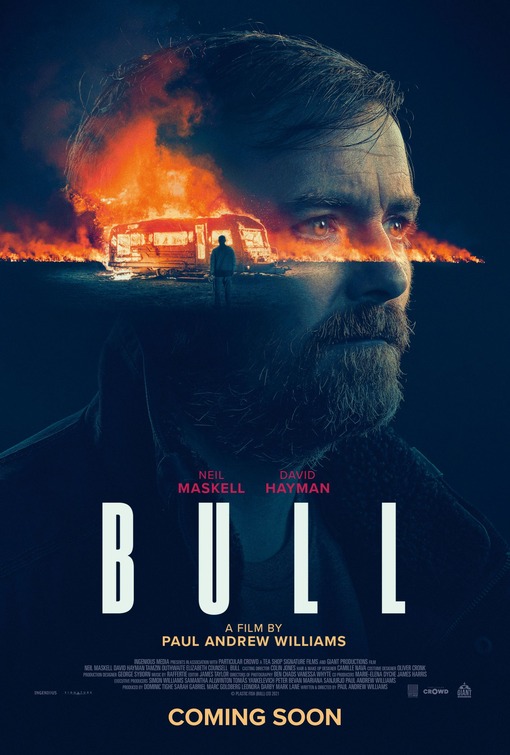 Everyone knows that Klingon proverb that says “Revenge is a dish best served cold”. Revenge flicks have always had a special place in my heart, as there is nothing like seeing a man or a woman avenge their families or a wrong that was done to them. The formula is simple, the wronged person goes off and creates a high body count, get those two things right and you are going to find quite a few fans. Bull is the latest film to take its turn at making people pay and for you the viewer, you get to cash in on some fine entertainment.

Ten years ago Bull (Neil Maskell) was made disappeared by Norm (David Hayman) and his group of thugs. Norm you see is Bull’s father-in-law and when his daughter Gemma (Lori Brabin-Platt) is done with Bull and wants to move on, Norm decides there is only one way to make that happen. Now when everyone thought Bull was gone he is back and he is looking to settle some scores with the people who did him wrong. You could say this is an exploration into human madness as Bull has one goal and he is going to work his way up the ladder to get what he needs.

Maskell’s performance of Bull is so compelling and his controlled serenity to violence ratio can be unsettling. Bull is taking a lot of pleasure in his acts, much to the dismay of his victims. Written and Directed by Paul Anderson Williams and shot in 18 days during the pandemic, Bull  had its work cut out for it, but thanks to some hard work, the end result is quite good. Having already raved about Maskell the other side of the coin is Hayman, who plays Bull’s chief rival and matches him pound for bloody pound. By the time we get to the final confrontation you are eagerly waiting to see these two go head to head.

In most revenge thrillers you have someone who you are truly rooting for, but that is where Bull  turns you around some. As the story progresses and the audience’s awareness broadens, the usual justification starts to be challenged. While it might turn the revenge thriller on its back some Bull is also a grounded revenge thriller that rarely ventures off course, but saving its biggest departure until the end. Paul Anderson Williams never lets the violence veer into outlandish territory and keeps the audience invested as he reaches his end goal. That and the two knock out performances by Maskell and Hayman make Bull  a revenge dish you are going to enjoy being served.