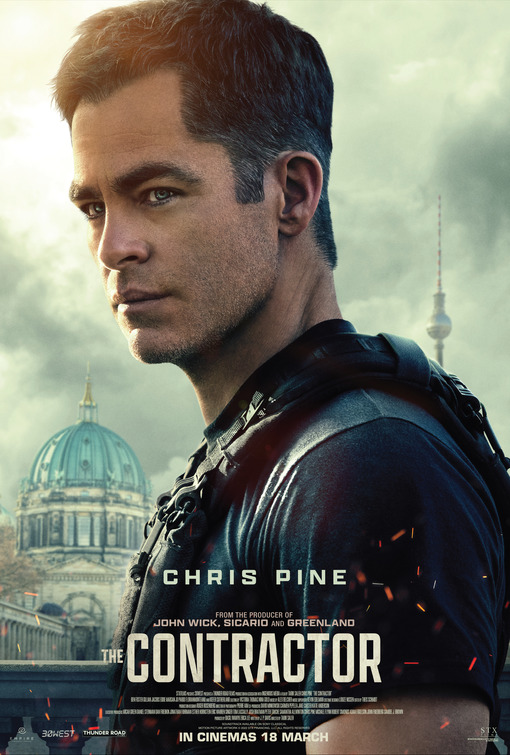 I have never been in the military before, but according to the movies after you have served, it is very hard to get a job after. This is the basic ingredient in a lot of former soldier movies and of course what leads them to become the thing they didn’t think they would. The Contractor is the latest in that line of movies, where things don’t go as planned and you have to do what you need to to make ends meet, but at least this one has Chris Pine.

Pine plays Jack Harper, a distinguished soldier, who because of health problems has to leave the service. Enter Mike (Ben Foster), who is one of Jack’s friends who he served with and has just the job for someone with the particular set of skills Jack has. So Harper goes with Mike to check things out and meets a fellow veteran (Kiefer Sutherland), who leads a team of former soldiers who get things done for money, you know mercenaries. With financial problems back home, Harper decides the money is too good to turn down and the job sounds easy enough, so he chooses to accept the mission and off to Germany he goes. Everything seems straightforward at first, but things take a turn and now he is trying to get back home, while also trying to figure out what went wrong.

Written by J.P. Davis, The Contractor  is a lot of been there, seen that, so much so, that there is not a lot of surprises and creativity going on here. Tarik Saleh who is behind the camera for his first American film, does a good job in the military action sequences, but he is hampered by a script that has a hard time separating itself from the many other films that do the same thing. The film really puts all of its marbles in one bag and is hoping the audience develops a connection with its characters, but because of a lack of interest in them, that becomes a problem.

I for one wanted to be able to get behind The Contractor,  for even though it is similar to others, you can always find one that makes its own path. Unfortunately this one doesn’t stray enough on the over-worn path. What is enjoyable to watch is mainly Pine’s performance, who along with Foster really are some of the movie’s only bright spots.  The other is some decent action sequences and with it The Contractor  ends up being exactly what it sells itself as, in the most predictable way. Pine and Foster deserve better (and quite frankly so do we as viewers) than a movie that really lacks any imagination. If though you need an action movie fix, this will do, just don’t expect to remember anything about it when it’s over, because it will just blend in with all the other films that come across as less than.