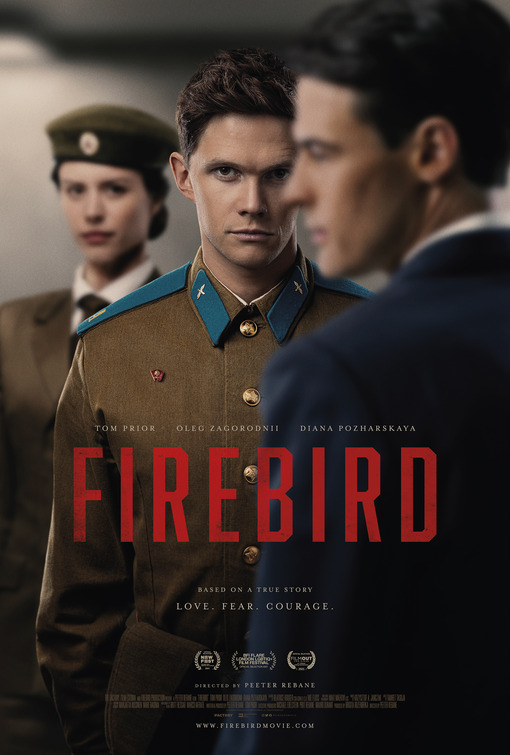 Up until 1993 if you were a man and you were caught with another man in the former Soviet Union, you would be spending time in prison. For twenty years, things took a step in the right direction, but in 2013 all the progress that was made was lost once again. Firebird is based on the  memoir The Story of Roman by Sergey Fatisov which takes place during that time before 1993 and tells the story of a forbidden love affair that began during his time in the military .

The story though doesn’t start off  as a love story between two men, but as a budding love between Sergey ( Tom Prior) and Luisa (Diana Pozharskaya). The two of them and another friend sneak off to a lake and swim at night, where Luisa and Sergey’s love looks imminent. Things change for them both when Roman (Oleg Zagorodnil) arrives on the base and with his good looks it is easy to see why. At first everything is normal, but things are ignited while Roman is teaching Sergey how to develop pictures, which is not the only thing that develops at that time. Soon more than passing glances are happening and it is obvious that the two men have feelings more than friends. This comes at a time when their love could not exist and after Roman is confronted by his superiors he cools things off between he and Sergey. It is then, that things start to heat up between Roman and Luisa, which at first feels more like for appearance than anything else. Soon Sergey is released from the military, which takes him to Moscow to be an actor. Time and Roman’s marriage to Luisa are not enough to stop the love between Roman and Sergey, as they try to find a way to be together in this uncertain time and place.

Written by Tom Prior and Peeter Rebane  from Fatisov’s book, with Rebane also directing, Firebird  is a film that is not about the politics of the time, but is simply about a love that develops despite the difficulties that were ever-present. The real star of the movie is the chemistry between Zagorodni and Prior, which sizzles on the screen and makes you feel the love the two men shared and carried over time.

The structure is familiar, the meet and budding romance, followed by obstacles and ultimately a choice that changes everything. What makes this movie stand out is once again the solid performances and Mait Mäekivi’s beautiful cinematography, which gives the movie an aesthetic vibrancy throughout. The movie is in English, which does take away from the story that is being told, as the loss of its natural language makes it feel less honest. Even with that though, Firebird manages to pull you into its tale and the lead actors both do an excellent job of portraying the character’s inner agony they both shared. I do think they tried too hard to not offend and told the safest version of this story, but even in safe mode, Firebird  still has plenty to offer.

All My Puny Sorrows