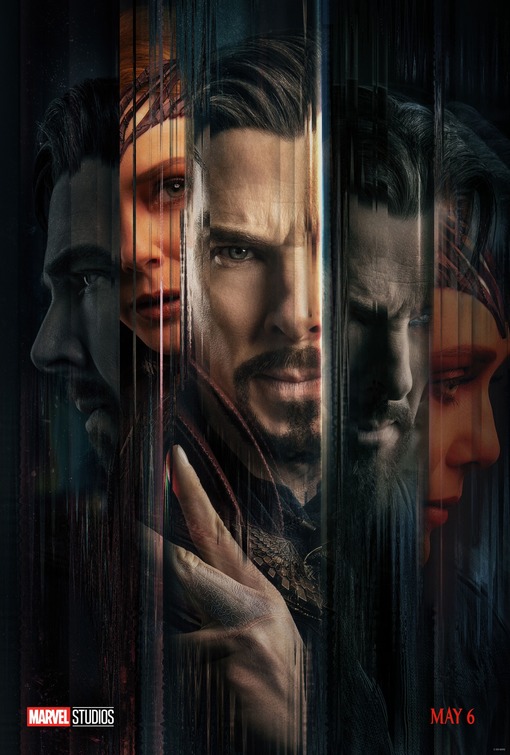 So multiverses are all the rage right now. It’s what’s hot in the street. After all the Spider-Man Spider-Verse and No Way Home of it all, it only makes sense that Marvel would keep that train rolling. Coming off his brief stint in the afore mentioned No Way Home, Dr. Strange (Benedict Cumberbatch) returns in the latest from the MCU: Doctor Strange in the Multiverse of Madness. Also returning to the Marvel universe after a 15 year absence is director Sam Raimi (Darkman, Army of Darkness, Drag Me to Hell). After he helped kickstart the age of heroes in 2002 with Spider-Man he steps back into this new world of wizards and witches.

We find Dr. Strange suffering from nightmares of disorienting spinning landscapes, running from big lightning monsters along side a mysterious young girl, America Chavez (Xochitl Gomez) who turns out to be a real person. When he encounters her in his waking life he discovers she has the ability to travel the Multiverse. With the help of Wong (Benedict Wong) and Wanda Maximoff (Elizabeth Olsen) Strange tries to guide the young girl into controlling her ability and also keep her out of the hands of those that want to use her power in order to rule the universes.

I’ll start by saying that I had very high expectations for this film, what with the fracturing and possibly expanding of the MCU, and Raimi going back to the genre he defined. And though there is a brief stint in an alternate Marvel Universe and this does indeed have Raimi’s fingerprints all over it, in the end it just wasn’t what I was hoping for. The script by Michael Waldron who made his bones in TV plays just like that, it doesn’t not come off very cinematic. And much like the comics that they were born from, Multiverse of Madness is like an Annual edition of a comic book, a self-contained adventure that is not connected to the main story that we’ve been following for 12 months. Strange practically ends up right where he started at the beginning  of the film. The introduction of America Chavez is a great addition and Gomez turns in a solid performance as does the rest of the cast, doing their best with what they have been given to work with.

Raimi does what he can to make this his own, we get his classic zany shots, and jump scares. But without a clear direction to steer towards, he’s left to just add elements that, fortunately do amount to a better sequel than Marvel has been know to turn out. Talking to you Iron Man 2 and Thor: The Dark World. However I can’t help but wonder if average audiences will respond to everything in the film without knowing the context presented in the Disney+ shows such as WandaVision and What If…

I also can’t help but think about what could have been with the team of the first Doctor Strange in director Scott Derrickson and writer C. Robert Cargill. Could they have turned in a better Marvel’s “first horror movie”? We’ll never know, but what I can say for certain is this is not the same kind of Sam Raimi film that I fell in love with. It feels like something it missing. The best way I can illustrate it is with Raimi’s totem, his yellow 1973 Oldsmobile Delta 88 that he puts in every one of his films. It’s in here too. And it’s 100% computer generated.

All My Puny Sorrows