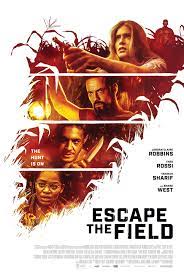 Everyone has different fears, but there are some that most of us share. Say going into that creepy house up on the hill as well as abandoned mental hospitals where nothing good is bound to happen. While those places seem like the obvious ones, there is another that for me is just as important to avoid, and that is corn fields. Other than supplying the popcorn you are eating while watching movies, nothing good happens in cornfields. For one, there is the thing that’s followed closely by children from those cornfields, which makes waking up in the middle of one all alone not the ideal situation.

That is what is going on with six strangers, who are about to find out the mess they are in. Each one wakes up with one item in their hand, there is a gun, some matches, a lantern, a canteen, a knife and no idea why they are there and who these other people are. After some reassuring from each of them when they meet, that they are not the enemy, the group starts to look for a way out from the cornfield maze. After they get past the panic faze, there are some who start to figure out that their ticket out might lie in the items they found themselves with when they awoke to this nightmare. Together they figure out those items are the keys to advance to the exit, and are soon discovering interesting puzzles that have been laid out in front of them. That puzzle though is not their only problem as someone or something starts to pick their group off one by one. Now it is a race to figure it all out before there is no one left.

Written by Sean Wathen, Joshua Dobkin, and Emerson Moore, the latter also directing Escape the Field  tells a story that leaves not just the characters looking for an escape. Focusing way too much on the puzzle aspect of the story instead of explaining things, neither of which actually help the players or us the viewers. As the mystery is decloaked the less interesting the movie gets, which makes us just root for whatever gets us to the end the quickest.

Escape the Field  has quite a few logic holes, mostly dealing with the groups lack of investigating their soundings for anything else than what they were provided with. I feel the writers wanted to write a story  that would play to both to our fear of cornfields and our love of escape rooms, but instead give us a movie that plays more to our dislike for movies that don’t work.  Some of the problems that Escape the Field  has can be forgiven, but its biggest, which is its ending , is hard to look past. I understand sticking the landing was going to be hard and while they don’t land on their face, they definitely don’t land on their feet either. There are a lot worst ways to spend a couple hours, but for me like the cornfields, I would avoid this one.