May 6, 202260/1002815 min
2GN4J7A UK. Jim Broadbent in the (C)Pathe UK new movie: The Duke (2021). Plot: Film adaptation of the Tony and Grammy Award-winning musical about Evan Hansen, a high school senior with Social Anxiety disorder and his journey of self-discovery and acceptance following the suicide of a fellow classmate. Ref: LMK106-J7341-190921 Supplied by LMKMEDIA. Editorial Only. Landmark Media is not the copyright owner of these Film or TV stills but provides a service only for recognised Media outlets. pictures@lmkmedia.com 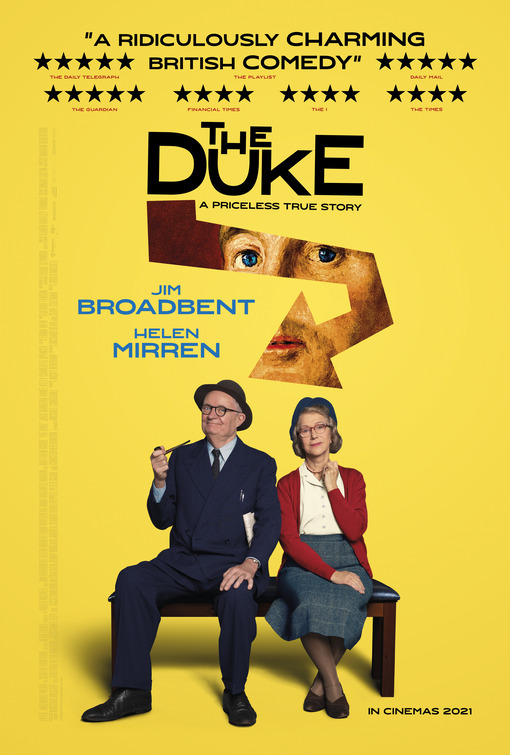 When you think of some of the great art heists, you never hear of the one involving Goya’s portrait of the Duke of Wellington. I blame it on the fact that there wasn’t some cool way it happened and what followed might be the most British thing ever. Who might this criminal mastermind be? You are excused if you have never heard the name Kempton Bunton.

In 1961 Bunton (Jim Broadbent) was a man of many jobs, meaning he never could hold one down for long. His wife Dorothy (Helen Mitten) meanwhile supported the family mostly by cleaning a house for a well off family. Together they live a very uneventful life, except for Kempton’s crusade for free TV for the elderly that shines a light on the couple that Dorothy would rather not have. After losing another job, Kempton travels to London in an attempt for that free TV.  The two days pass and Kempton returns home and while he may not have succeeded in getting a television, he didn’t exactly come home empty handed. While in old London town, he visited a museum and while most people stop at the gift shop to get something to mark the occasion, Kempton took something else, a nearly 150 year old painting. After his son builds a little hiding spot for the portrait, Kempton starts his ransom demands, but the money is not for him, it is instead for the good of everyone. It’s for free TV.

Written by Richard Bean and Clive Coleman, The Duke  is a pretty entertaining time, largely thanks to Broadbent who really gets to show off what makes him great. The film has its share of amusing moments, especially the notion that the only people who could have stolen this painting was a sophisticated international criminal gang. Of course Kempton Bunton is about the furthest thing you can get from that, but he is still someone that pulled off this great heist.

The Duke  is a well-paced film that has an outstanding cast and a twist in the third act you never see coming. While other heist movies are about said heist, The Duke keeps that element in the background and decides on telling an incredibly heartwarming story in a very sweet way. Filled with British humor and lots of cups of tea, it finds a way to tell you a story you probably never heard, all while making sure you have a bloody good time. This could have easily been as stiff as a heavy starched shirt, but not so thanks to Broadbent, whose character walks the perfect line between being a troublemaker and charmer. Ultimately The Duke is what it is, not because of the facts of the event, but instead focusing on the emotions while telling us the real motive. This is the movie that feels like a warm hug, one that comforts you all while making you feel good inside.

Doctor Strange in the Multiverse of Madness